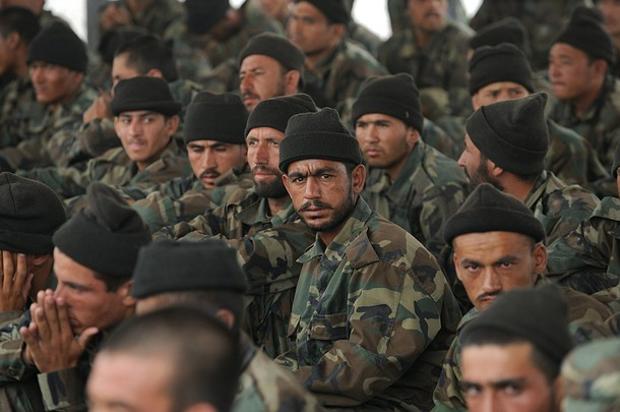 From the BBC:  Hundreds of soldiers in Afghanistan have been dismissed or detained after a probe into a surge of insider attacks against foreign forces, officials say.

There were no further details about the exact number of troops affected or the precise grounds for dismissal. . . .

Mr Azimi told a news conference that many of the soldiers were removed because they had either incomplete or forged documents, the Associated Press news agency reports.

"We have found evidence against some people and some suspicious people have been arrested," he said.

"Using an army uniform against foreign forces is a serious point of concern not only for the defence ministry but for the whole Afghan government," he is quoted as saying.

From Emal Haidary, AFP:  Defence ministry spokesman General Zahir Azimi said Wednesday: "So far, hundreds of people have either been arrested or expelled from the army. . . ."

Karzai’s spokesman told AFP on the same day that the attacks were the "mutual responsibility" of both NATO and Afghan forces, and the president had ordered all Afghan forces to be re-vetted.

General Martin Dempsey, chairman of the US Joint Chiefs of Staff, said it was the first time that Afghans were as concerned about the attacks as the Americans.

Azimi on Wednesday denied that NATO training for Afghan soldiers had been affected with the spokesman insisting it was still "going well".

He also stood behind the processes of recruitment and vetting.

"Good attention was paid during the recruitment process, but when some soldiers went on vacation and came back they became somehow problematic," he said. (photo: AFP)