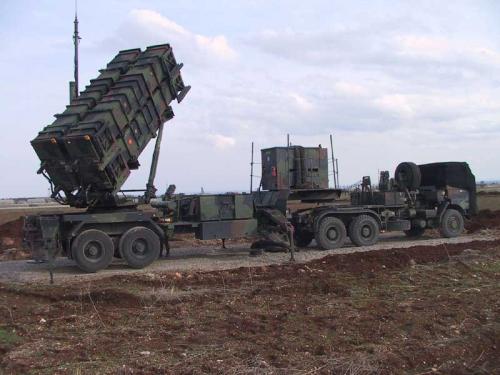 From AP:  Even if NATO quickly approves Turkey’s request for the deployment of Patriot missiles on its border with Syria, winning parliamentary approval, selecting sites for the air defense batteries and transporting them there means they probably wouldn’t be operational for weeks.

Syria’s civil war has left Turkey the target of artillery and mortar fire. Syria is believed to have several hundred ballistic surface-to-surface missiles in its arsenal capable of carrying chemical warheads.

Germany, the Netherlands and the U.S. have the advanced PAC-3 model Patriots that Turkey wants for intercepting ballistic missiles, but if they come from the two European countries, their parliaments may have to vote on that first.

NATO said Wednesday it will consider Turkey’s request “without delay,” and next week a NATO team will visit the alliance member for a site survey to consider a deployment. Officials say the Patriots would probably be sent by sea.

With events in Syria changing rapidly, and deaths already having occurred on the Turkish side of the border, the wait may leave NATO-member Turkey anxious about its vulnerability to air raids or even chemical attack from across the border. . . .

Due to the complexity and size of the Patriot batteries, their radars, command-and-control centers, communications and support facilities, they cannot be sent quickly by air to Turkey, officials said.

“These are not drop-and-go systems,” said an official who could not be identified in line with standing NATO regulations.

Additional time will be needed to install the systems, realign their radars and link them into Turkey’s air defense network before the Patriots can be considered fully operational, the official said.  (photo: NATO)