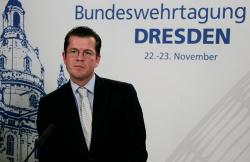 From the International Institute for Strategic Studies:  The successful transformation of the Bundeswehr will depend on a secure funding base. The 2011 defence budget has been set at €31.5 billion, which is around 1.2% of GDP. Against the background of a constitutionally mandated ‘debt ceiling’, the finance ministry has set a target of cutting the total defence spend by €8.4bn between 2010 and 2014. [German Defense Minister Karl-Theodor] zu Guttenberg calculated that the maximum number of military personnel that Germany could afford under this savings target was 163,500, but said that this figure represented a bare minimum in terms of the country’s ability to fulfil its obligations.

There is all-party consensus that this number is too low and politically unacceptable. Zu Guttenberg argues, however, that if it were higher, the targeted budget cuts could not be achieved. …

It is expected that the Luftwaffe will not acquire the 37Eurofighter aircraft previously planned for tranche 3B, and will therefore operate 140 aircraft in three operational wings, one less wing than had been foreseen. The Tornado fleet is to be reduced from the current operational figure of 185 to 85, organised in two wings, one focused on electronic countermeasures and reconnaissance, and another focused on interdictor/strike. There has been speculation that the Luftwaffe will operate only 40 of the 53 A400M aircraft that Germany plans to acquire (already reduced from 60), with the remaining 13 to be sold off. The new number suggests that there will be only one strategic transport wing instead of two.

The navy, the smallest of the three services, is especially keen to learn of its manpower allocation, as this will determine the number of platforms that it will be able to operate. It does not currently intend to give up any of its core capabilities: 15 frigates, five Type K130 corvettes, four submarines (with two more under construction), 15 mine-countermeasure vessels (a reduction from the previous 19) and eight maritime-patrol aircraft. As the navy awaits delivery of four Type F125 frigates, it has been suggested that the total might be cut to 12 by retiring three Type F122 frigates earlier than planned. Having retired all Type 206A submarines, the navy currently operates four Type 212A submarines with another two under construction. Multi-crewing for the submarines, under which crews would be designated to man a class of vessel rather than a particular vessel, is one solution under review. There are two further acquisitions on which the navy has set its sights: a Joint Support Ship (akin to the Dutch Rotterdam-class) and a multi-purpose off-shore patrol craft designated K131. These programmes will depend on the availability of funds and personnel. …

The army is planning for a best- and worst-case scenario. The best outcome would be six infantry brigades which would relieve each other in operations, each with an air-assault element to comprise the army’s helicopter assets plus one parachute battalion and one light infantry regiment. The worst case would see the army down to three ‘operational commands’, which would be predominantly composed of infantry and would each have one tank and one artillery battalion, plus the air-assault element. Each operational command would be able to produce either one divisional headquarters or two brigade headquarters after ample preparation. However, the army’s preference is for a classic brigade structure.  (photo:  International Institute for Strategic Studies), (via Global Europe)