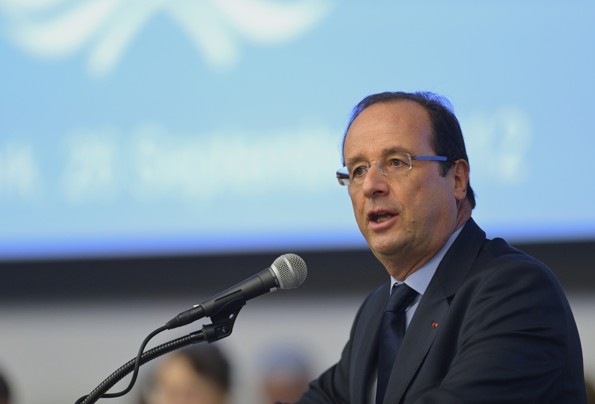 From Edward Cody, the Washington Post:  After a swell of euphoria over President Francois Hollande’s electoral victory in May and a blissful timeout for summer vacation, France is coming to grips with a harsh reality of high unemployment, tax increases and budget cuts imposed by a flat-lining economy and Europe’s perilous debt crisis. . . .

Hollande promised to renegotiate a treaty committing European Union countries to limiting their debt to 3 percent of gross domestic product, raising hope that the economic discipline implied in such a goal could be bypassed.

The feeling of doldrums has crystallized in recent days over [Finance Minister, Pierre] Moscovici’s 2013 budget, which is scheduled to be adopted at a government meeting Friday and presented to the French Parliament for a vote early next month. In it, one figure stands out: the nearly $40 billion needed to balance the budget enough to come close to the 3 percent figure called for in the E.U. fiscal treaty.

In addition, Labor Minister Michel Sapin acknowledged Wednesday what specialists already knew: unemployment has topped 3 million people, a rate of about 10 percent, and a growing list of companies are announcing layoffs because of zero growth. . . .

Hollande’s standing in a key opinion poll has plummeted 11 percent since vacations ended, to an unusually low 43 percent approval rating in a survey published Sunday in the Journal du Dimanche. . . .

Even more troubling, National Assembly speaker Claude Bartolone, a senior figure in Hollande’s government, told a radio interviewer that the 3 percent goal is “unbearable” in France’s current economic situation, no matter what the treaty says. He added that the European Commission, the E.U. executive in Brussels, should admit this and declare that the goal can be set aside when economic growth lags.

In fact, this is what happened in the European Union for years. Governments, including France and even Germany, routinely opted out of previous E.U. agreements to limit debt to 3 percent of GDP. The fiscal discipline treaty, concluded last December under pressure from Sarkozy and Chancellor Angela Merkel of Germany, was designed to prevent such “crossing your fingers” by imposing fines on governments that borrow over the limit.

In any case, the budget calculations by Moscovici’s ministry are likely to be revised next year. They have been based on a forecast of .08 percent economic growth, when a number of French economists say a more realistic prediction is half that.

The European Commission, for instance, has forecast that France will still have a debt level above 4 percent next year. (photo: Eric Feferberg/AFP/Getty)