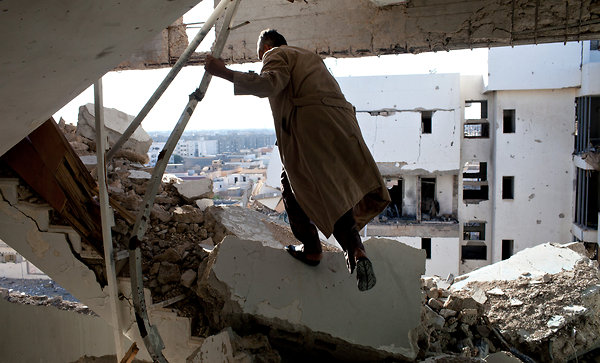 From C. J. Chivers and Eric Schmitt, the New York Times:   NATO’s seven-month air campaign in Libya, hailed by the alliance and many Libyans for blunting a lethal crackdown by Col. Muammar el-Qaddafi and helping to push him from power, came with an unrecognized toll: scores of civilian casualties the alliance has long refused to acknowledge or investigate.

By NATO’s telling during the war, and in statements since sorties ended on Oct. 31, the alliance-led operation was nearly flawless — a model air war that used high technology, meticulous planning and restraint to protect civilians from Colonel Qaddafi’s troops, which was the alliance’s mandate.

“We have carried out this operation very carefully, without confirmed civilian casualties,” the secretary general of NATO, Anders Fogh Rasmussen, said in November.

But an on-the-ground examination by The New York Times of airstrike sites across Libya — including interviews with survivors, doctors and witnesses, and the collection of munitions remnants, medical reports, death certificates and photographs — found credible accounts of dozens of civilians killed by NATO in many distinct attacks. The victims, including at least 29 women or children, often had been asleep in homes when the ordnance hit.

In all, at least 40 civilians, and perhaps more than 70, were killed by NATO at these sites, available evidence suggests. While that total is not high compared with other conflicts in which Western powers have relied heavily on air power, and less than the exaggerated accounts circulated by the Qaddafi government, it is also not a complete accounting. Survivors and doctors working for the anti-Qaddafi interim authorities point to dozens more civilians wounded in these and other strikes, and they referred reporters to other sites where civilian casualties were suspected.

Two weeks after being provided a 27-page memorandum from The Times containing extensive details of nine separate attacks in which evidence indicated that allied planes had killed or wounded unintended victims, NATO modified its stance.

“From what you have gathered on the ground, it appears that innocent civilians may have been killed or injured, despite all the care and precision,” said Oana Lungescu, a spokeswoman for NATO headquarters in Brussels. “We deeply regret any loss of life.”

She added that NATO was in regular contact with the new Libyan government and that “we stand ready to work with the Libyan authorities to do what they feel is right.”

NATO, however, deferred the responsibility of initiating any inquiry to Libya’s interim authorities, whose survival and climb to power were made possible largely by the airstrike campaign. So far, Libyan leaders have expressed no interest in examining NATO’s mistakes.

The failure to thoroughly assess the civilian toll reduces the chances that allied forces, which are relying ever more heavily on air power rather than risking ground troops in overseas conflicts, will examine their Libyan experience to minimize collateral deaths elsewhere. Allied commanders have been ordered to submit a lessons-learned report to NATO headquarters in February. NATO’s incuriosity about the many lethal accidents raises questions about how thorough that review will be. . . .

There are indications that the alliance took many steps to avoid harming civilians, and often did not damage civilian infrastructure useful to Colonel Qaddafi’s military. Elements of two American-led air campaigns in Iraq, in 1991 and 2003, appear to have been avoided, including attacks on electrical grids.

Such steps spared civilians certain hardships and risks that accompanied previous Western air-to-ground operations. NATO also said that allied forces did not use cluster munitions or ordnance containing depleted uranium, both of which pose health and environmental risks, in Libya at any time.

While the overwhelming preponderance of strikes seemed to have hit their targets without killing noncombatants, many factors contributed to a run of fatal mistakes. These included a technically faulty bomb, poor or dated intelligence and the near absence of experienced military personnel on the ground who could help direct airstrikes.

The alliance’s apparent presumption that residences thought to harbor pro-Qaddafi forces were not occupied by civilians repeatedly proved mistaken, the evidence suggests, posing a reminder to advocates of air power that no war is cost- or error-free. . . .

Pressed about the dangers posed to noncombatants by such attacks, NATO said it would reconsider the tactic’s rationale in its internal campaign review. “That’s a valid point to take into consideration in future operations,” Colonel Julian said.

That statement is a shift in the alliance’s stance. NATO’s response to allegations of mistaken attacks had long been carefully worded denials and insistence that its operations were devised and supervised with exceptional care. Faced with credible allegations that it killed civilians, the alliance said it had neither the capacity for nor intention of investigating and often repeated that disputed strikes were sound.  (photo: Tyler Hicks/New York Times)