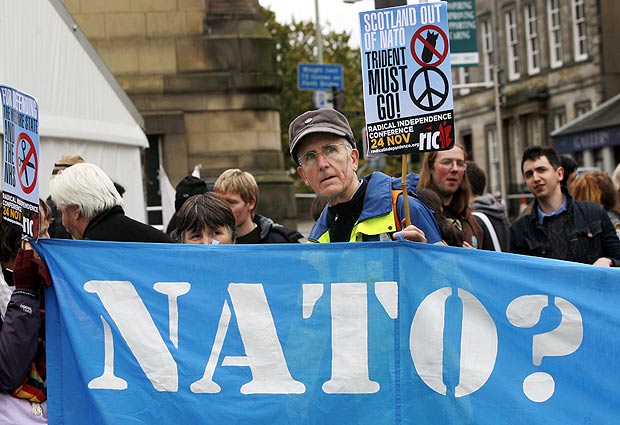 From Simon Johnson, Telegraph: A detailed study of defence in a separate Scotland predicted the SNP would face an “unpalatable dilemma” between keeping Trident submarines on the Clyde and being refused entry to Nato. . . .

Academics, who conducted interviews with Nato officials for the report, said the Americans were “sceptical” about a separate Scotland because nationalist opposition to Trident would “erode” US interests.

A separate Scotland may have to agree to keep Trident in its waters in return for the remainder of the UK supporting its Nato application but such a deal was fraught with difficulties, they said.

The warning came after the report, published by a think tank called the Scotland Institute, provided a devastating critique of the failings of the SNP’s “fundamentally flawed” and “naive” defence policy.

Major-General Andrew Mackay, the British Army’s former commanding officer in Afghanistan, who oversaw the report, said: “What we now really require is the SNP to consider defence in an independent Scotland in a holistic manner and actually publish for the record what it would intend a Scottish defence force would look like. . . .”

The Nationalists have claimed they would spend more than the UK does north of the Border but the study said this boast was “fundamentally flawed” as it assumes only servicemen based in Scotland help defend the country.

Their £2.5 billion proposed defence budget is not enough to provide the armed forces they want and assumes they will have access to the UK’s defence infrastructure currently based north of the Border, the report warned.  (photo: Daily Mail)