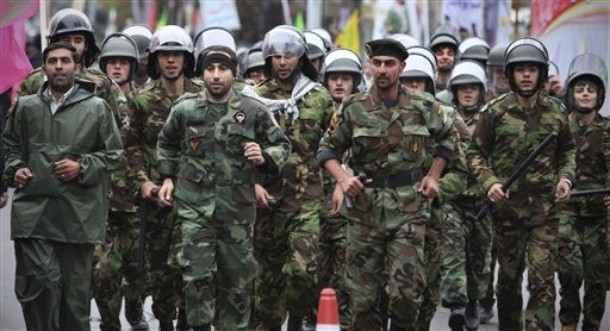 From Farnaz Fassihi, the Wall Street Journal:  Iran is sending commanders from its elite Iranian Revolutionary Guard Corps and hundreds of foot soldiers to Syria, according to current and former members of the corps. . . .

A commander of the Iranian Revolutionary Guard Corps, or IRGC, appeared to offer Iran’s first open acknowledgment of its military involvement in Syria.

"Today we are involved in fighting every aspect of a war, a military one in Syria and a cultural one as well," Gen. Salar Abnoush, commander of IRGC’s Saheb al-Amr unit, told volunteer trainees in a speech Monday. The comments, reported by the Daneshjoo news agency, which is run by regime-aligned students, couldn’t be independently verified. Top Iranian officials had previously said the country isn’t involved in the conflict. . . .

"One of Iran’s wings will be broken if Assad falls. They are now using all their contacts from Iraq to Lebanon to keep him power," Mohsen Sazegara, a founding IRGC member who now opposes the Iranian regime and lives in exile in the U.S., said by telephone.

On Thursday, Iran’s defense minister publicly signaled a shift. If Syria fails to put down the uprising, Iran would send military help based on a mutual defense agreement between the two countries, two Iranian newspapers quoted Defense Minister Ahmad Vahidi as saying. Syria hadn’t asked for assistance yet, he added.

"Syria is managing this situation very well on its own," he said. "But if the government can’t resolve the crisis on its own, then based on their request we will fulfill our mutual defense-security pact. . . ."

Iranian Supreme Leader Ayatollah Ali Khamenei, who has the final word in all state matters, has appointed Qasim Solaimani, the commander of the elite Quds Forces, to spearhead military cooperation with Mr. Assad and his forces, according to an IRGC member in Tehran with knowledge about deployments to Syria.

The Quds Forces are the IRGC’s operatives outside Iran, responsible for training proxy militants and exporting the revolution’s ideology. The U.S. blames the Quds Forces for terrorist attacks in Afghanistan and Iraq. . . .

Iran is now sending hundreds of rank-and-file members of the IRGC and the basij—a plainclothes volunteer militia answering to the guards—to Damascus, said two people in the IRGC familiar with the movements.

Many of the Iranian troops hail from IRGC units outside Tehran, these people say, particularly from Iran’s Azerbaijan and Kurdistan regions where they have experience dealing with ethnic separatist movements. They are replacing low-ranking Syrian soldiers who have defected to the Syrian opposition, these people said, and mainly assume non-fighting roles such as guarding weapons caches and helping to run military bases.

Iran has also started moving military aid and cash to Syria through Iranian companies in Iraq, such as a construction company owned by a former IRGC member now living in Iraq and a tour company servicing pilgrims to holy Shiite sites, said Mr. Sazegara and a person in Iran familiar with the construction company.  (photo: AP)