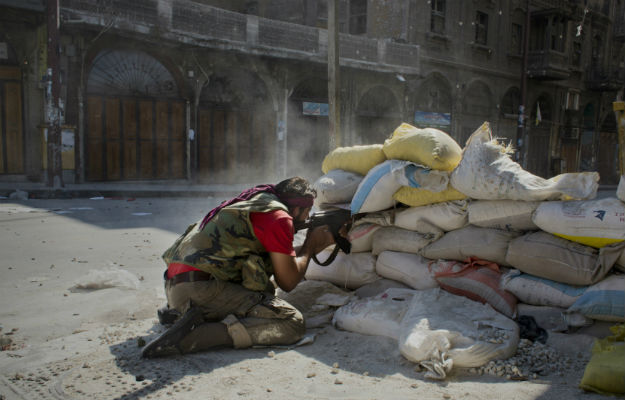 From Butch Bracknell, Best Defense:  One possible first step toward NATO taking decisive action in this crisis is to ask Turkey for permission to set up a command and control structure in Turkey aboard an American or Turkish airbase. The task force’s initial mission set should extend to intelligence, reconnaissance, and surveillance of the conflict in Syria, and humanitarian assistance/disaster relief. Bringing NATO resources to bear by constructing and maintaining refugee camps in Turkey and protecting the refugees for the duration of the Syrian conflict will be seen as a signal of the alliance’s resolve and usefulness, and will refocus the world’s attention on the atrocities in Syria, heightening pressure on Assad to resolve the conflict and seek reconciliation, or to resign in disgrace. . . .

Finally, having a command and control structure in place would be useful if conditions in Syria evolve to the point that armed intervention to stop the slaughter becomes viable and unavoidable. Eventually, Russia may feel the pressure to abstain from a Security Council vote authorizing intervention, rather than risk cementing its reputation as an obstructionist state to the international order or appearing impotent and irrelevant. Even absent an explicit Security Council authorization, Western allies may, in fact, embrace the moral obligation to intervene summarized by the Responsibility to Protect doctrine.

Armed intervention in Syria is not unavoidable, but inaction by NATO should be. There are many competencies the alliance can operationalize to mitigate human suffering in the region which could provide a foothold capability as mission sets evolve. Finally, NATO’s action to mitigate Arab suffering in Syria could help tamp down the fury against the West and send productive communicative ripples through the Arab world. As many commentators have observed, NATO’s future relies on its ability to actually accomplish missions that add value to the sum total of international security. Skeptical voters in cash-strapped Western democracies rightly should require return on their investment. If the alliance neglects to act in circumstances where turning a blind eye constitutes organizational failure, eventually it may fail to exist.

Butch Bracknell is a Marine lieutenant colonel on active duty and former international security fellow at the Atlantic Council of the United States. The opinions expressed herein are personal to the author and do not represent the position of the United States government or of Red Sox ownership.  (photo: Adam Dean/Panos Pictures)