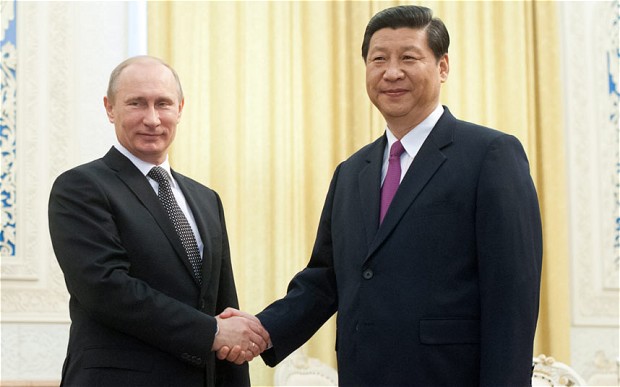 From Georgy Bovt, Moscow Times:  Whenever high-level talks are held between Russia and China, it seems the media always says  Moscow’s foreign policy is focusing on the East. There is some basis for that, but it is also becoming increasingly evident that Russia is taking on the role as China’s junior partner. . . .

Russian oil accounts for only 8 percent of Chinese consumption, and Russian coal represents an even smaller share. As a result, since Beijing can easily find other energy suppliers, China is in a strong position to dictate, or at the very least influence, terms to Russia in future negotiations.

Not long ago, Russia was a major supplier of equipment, weapons and technology to China. Today, the situation has changed dramatically — and not to Russia’s advantage. Only 10 years ago, industrial goods and equipment accounted for 30 percent of Russia’s trade with China. Now they represent less than 1.5 percent. Russia now buys Chinese metalworking machinery, something that only a few years ago would have been considered absurd. Only a short time ago, Russia was one of China’s main weapons suppliers. Now China has practically no need of Russian arms, having copied whatever much of what it needs. The weapons that China has purchased from Russia could be used in a air war with Taiwan but not in a massive land-based operation against Russia. For example, China purchased only a small quantity of Su-27 fighter aircraft, and half of those were the training model. This small quantity is insufficient to equip the enormous Chinese army, but enough to train the flight crews of its air force. But not long ago, China rejected an offer to produce the Su-27 under license from Russia and instead began production of its own J-11B aircraft that draws on the Su-27 as well as on technology borrowed from the MiG and Israeli aircraft.

Amazingly, Moscow doesn’t seem to have a problem with this rather strange, one-sided model of Russian-Chinese relations. Kremlin leaders seemingly pretend that the bilateral relations are equal and based on mutual respect and that China is actually prepared to team up with Russia to present a unified front against the U.S. If so, they have allowed themselves to be fooled: China will never allow itself to be used in foreign relations ploys — except the ones that it has designed itself.