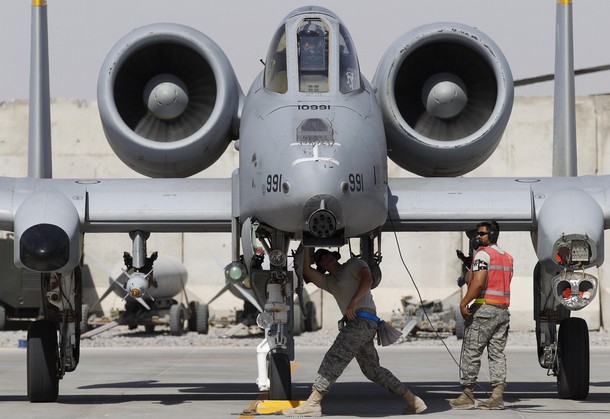 From David Brunnstrom, Reuters:  French officials and military analysts say the U.S. fleet of low-flying ground-attack A-10 aircraft and AC-130 gunships could help break the stalemate , but U.S. officials said they would be at "high risk" from Gaddafi’s shoulder-fired missiles.

Helicopters would be even more effective but even more vulnerable to ground fire by Gaddafi’s forces — as has been shown in NATO’s war in Afghanistan.

The U.S. administration is particularly sensitive to the risk of losses in Africa after the Clinton’s administration’s experience in Somalia dramatized in the movie "Blackhawk Down."

"Somalia caused Clinton a lot of problems and Obama doesn’t want that. There are a lot of people in Obama’s administration who served in the Clinton administration and remember it well," [EUISS Research Fellow Daniel] Keohane said.

While European states in NATO have more than 800 attack helicopters they can call on, and Britain, at least, has the means to operate them in Libya from amphibious landing ships, all allies are reluctant to increase the risk to their forces.

"There’s a general problem in that you only have seven NATO states now willing to hit ground targets," Keohane said.

"There’s even more risk using helicopters as they are easier to shoot down, and it’s a serious political problem if you have casualties or people captured."  (photo: Reuters)