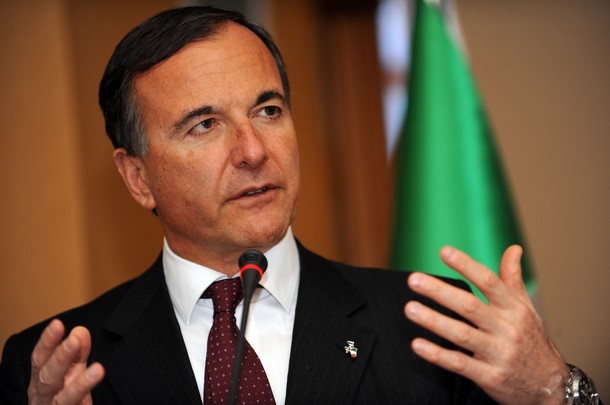 From Philip Pullela, Reuters:  Italy will propose that it and Germany back a joint plan on Libya that involves a ceasefire, a humanitarian corridor and exile for Libyan leader Muammar Gaddafi, Foreign Minister Franco Frattini said.

Frattini said in an interview published on Sunday by La Repubblica newspaper that Rome would try to get Berlin to agree to the plan and present it at a London meeting to set up a high-level steering group on Libya.

"We have a plan and we will see if it can be translated into an Italian-German proposal, perhaps in a joint document that can be presented on Tuesday," he said.

He said it included a ceasefire monitored by the United Nations and a "permanent humanitarian corridor" to let aid in, which he said Turkey was already making efforts to achieve. …

"In these difficult days, Europe has perhaps lost some pieces. We don’t want to lose Germany and an evolution towards a ceasefire will make it easier to see its re-entry," Frattini said.  (photo: Getty)