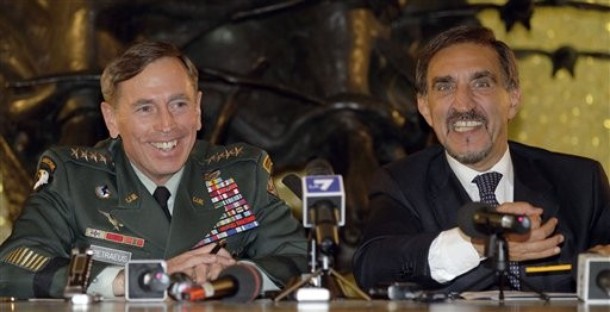 From DPA:  Italy wants to expand its troop presence in Afghanistan by more than a third, Italian media quoted Defence Minister Ignazio La Russa as saying Saturday during a meeting with US General David Petraeus in Milan.

‘We have decided to increase our contingent in Afghanistan to 4,000 troops by the end of the year,’ he said.

Italy currently has some 2,800 soldiers participating in the NATO-led International Security Assistance Force. Prime Minister Silvio Berlusconi had repeatedly promised to deploy more soldiers this year for a limited time to the war-torn country.

From Xinhua:  Speaking at a press conference at the end of the meeting, La Russa said that he didn’t talk with Petraeus about exit strategies or dates, as thinking of an exit strategy "means to advantage terrorists."

"I prefer to talk about goals instead," he said, adding that Italy’s goal is to return the Afghan territory to local government and army, so that they themselves can continue in counter-terrorist action and start a phase of normalization.

In La Russa’s view, 2011 may be a decisive year, because the reconstruction plan in the west part of Afghanistan is continuing.

"I think that before the end of 2011 several districts of the West will be delivered. Herat, for example, is already an area that could be ready," he said.  (photo: AP)