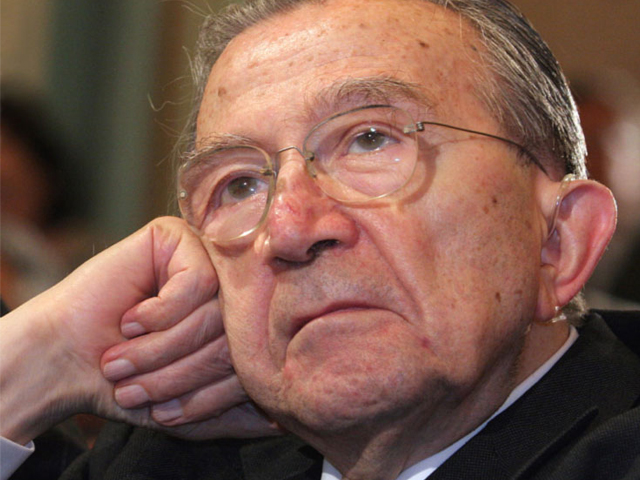 From Philip Pullella, Reuters:  Giulio Andreotti, who served as Italian prime minister seven times and whose name was synonymous with political survival and cunning in the land that gave the world Machiavelli, died on Monday at the age of 94.

Andreotti, who for more than half a century was known as "Mr Italy" because of the many offices he held, died at home, family sources said. He had suffered from respiratory problems for years and had been in hospital several times.

A leading member of the defunct Christian Democrat party which dominated Italian politics for almost fifty years after World War Two, Andreotti was a lawmaker in every Italian parliament since 1945. He was made a senator for life in 1991.

He was a complex figure who embodied the contradictions and intrigues of Italy’s often shady politics.

His enemies called him Beelzebub but he was deeply religious and took communion from popes. He was accused and acquitted both of being a member of the mafia and of ordering the murder of a muck-raking journalist.

His supporters said he served his country like few others, helping transform Italy from a war-devastated agricultural backwater to a leading industrial power in the space of a generation.

But many Italians believed he was the quintessential back-room wheeler-dealer, overseeing a political system riddled with cronyism and corruption.

He held nearly every political post in Italy short of the presidency. His leadership of seven post-war governments was beaten only by his mentor, Alcide De Gaspari, who led eight.

At the end of a sensational trial and two appeals, Andreotti was cleared in 2004 of charges that he had been a member of the mafia and had protected the mob in the corridors of power.

However, Italy’s highest court said he had ties until 1980 with mafia gangsters, which were covered by the statute of limitations. . . .

Andreotti denounced the accusations, based on testimony from mafia turncoats, and in the end, the courts believed him. . . .

"Power wears out those who don’t have it," he once said in a famous retort.

From BBC:  He [Andreotti] was strongly anti-communist, pro-American and supportive of Nato.

He was known as a pro-European who committed Italy to European integration and helped forge the way forward to a single currency.

He was one of the most prominent figures of the "years of lead" during the 1970s and 1980s, when hundreds of people were killed in political violence. . . .

From MAtteo Tonelli, La Repubblica:  It is not easy to tell the story about one of the founding fathers of the Constitution, seven times Prime Minister, eight times Minister of the Defence, five times Foreign Minister, Minister of Finance and the Treasury, Minister of the Interior.  Andreotti signed the Maastricht Treaty; he signed the law which made abortion legal and the nationalization of Totocalcio (football pools). He had a say in the decision which made Mameli’s Hymn the Italian national anthem.

So we can start by saying that Giulio Andreotti was born in Rome on January 14, 1919. The same year in which Fascism and Don Sturzo’s PPI began.  "I am the only one still here,  out of the three" he said with irony not too long ago.  He was immediately interested in politics.  He met De Gasperi and became his secretary.  Indro Montanelli made a statement which photographs their relationship:  "When they went to church together, De Gasperi would speak to God, Andreotti would speak to the priest."   (photo: Contatto News)