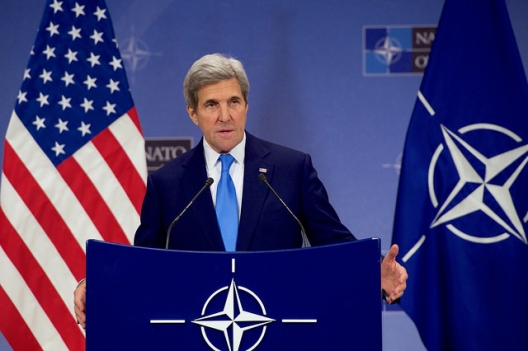 Let me share with you what I told my colleagues more specifically: The United States commitment to NATO and to Article 5 transcends politics. This alliance has enjoyed political support beyond political parties and beyond one branch of government or another, and across our vast land, the United States, I can tell you we remain committed to those principles. I think that – I can’t overstate the degree to which I am confident that the majority of both parties in the United States – both major parties – are committed to NATO itself and to those principles because NATO and those principles delivered an end to the Balkan Wars, delivered solidarity after September 11th, and delivered burden sharing in Afghanistan and against terrorism.

The allies around NATO’s table are America’s closest friends and most capable partners. And together, we built the world post-World War II, liberal order, the order that has withstood the test of time. And I believe today we have to stay united in its defense.

Now as long as there are grave dangers in the world, NATO is going to serve an indispensable purpose. But an even deeper source of NATO’s strength is its commitment to freedom, to human rights, to rule of law, to a structure. The countries sitting here are not sitting around this table plotting to disturb the sovereignty of any nation. This is a defensive alliance, and it is here to defend the order of freedom and the order of liberty and the rule of law.

NATO defends freedom every day in a real world where it is threatened and in many cases threatened by people who have no other agenda to offer anybody. They’re not talking about a better rule of law; they’re not talking about a better order; they don’t talk about how to educate whole populations or build a healthcare system or deliver transportation. No, the people, the non-state actors that we’re fighting with today in the world just want to say no, and they want to kill anybody who isn’t willing to say no with them. And that’s why they’ve killed Yezidis because they’re Yezidis; they’ve killed Christians because they’re Christians; they kill Shia because they are Shia. And that is against everything that we have fought for and stood for since the inception of NATO itself.

So I am confident about what we are working on here, and I am absolutely confident that the next administration and the Congress will stand together in support of the values and principles that are represented in this significant endeavor….

QUESTION: Defense expenditure of NATO – European NATO allies was an issue during the U.S. election campaign. Are you satisfied with what European allies have been doing so far to increase their defense expenditure, and are you confident that this question will not be linked in the future to the U.S. commitment to Article 5?

SECRETARY KERRY: I am happy that a number of countries are plussing up their defense expenditures, and I raised the issue of defense expenditures again today, as I have, I think, at almost every NATO meeting. And right now there are five countries in NATO that are at the goal, the established goal of 2 percent for every member country: the United States, the UK, Greece, Poland, and Estonia. But since Wales, 24 allies have stopped the long trend of decline, so we’re pleased that there has been an arresting of the wrong direction movement and they are beginning to increase spending to move in the right direction.

So yes, I am pleased with that, but I want to emphasize that just increasing and increasing by small percentages will not do the job for NATO in the long run. We need to meet the goals of 2 percent, and every country needs to meet its obligations. I am confident that Article 5 is not going to be held hostage to the lack of one country or another or several having met that goal. That’s not going to happen. Article 5 is larger than – it’s about principle, it’s about security. But I do think that’s why it is so important for countries to, as I said earlier, put their actions where the words are with respect to the NATO alliance.