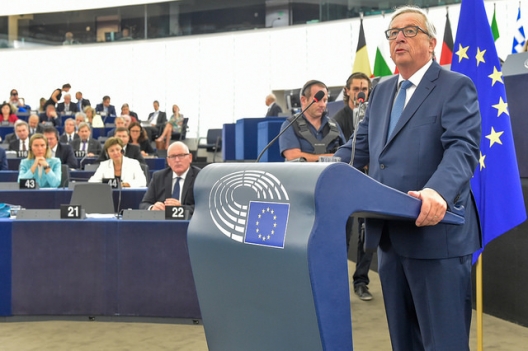 We must defend ourselves against terrorism.

Since the Madrid bombing of 2004, there have been more than 30 terrorist attacks in Europe – 14 in the last year alone. More than 600 innocent people died in cities like Paris, Brussels, Nice, or Ansbach.

Just as we have stood shoulder to shoulder in grief, so must we stand united in our response.

The barbaric acts of the past year have shown us again what we are fighting for – the European way of life. In face of the worst of humanity we have to stay true to our values, to ourselves. And what we are is democratic societies, plural societies, open and tolerant.

But that tolerance cannot come at the price of our security.

That is why my Commission has prioritised security from day one – we criminalised terrorism and foreign fighters across the EU, we cracked down on the use of firearms and on terrorist financing, we worked with internet companies to get terrorist propaganda offline and we fought radicalisation in Europe’s schools and prisons.

But there is more to be done.

We need to know who is crossing our borders.

That is why we will defend our borders with the new European Border and Coast Guard, which is now being formalised by Parliament and Council, just nine months after the Commission proposed it. Frontex already has over 600 agents on the ground at the borders with Turkey in Greece and over 100 in Bulgaria. Now, the EU institutions and the Member States should work very closely together to quickly help set up the new Agency. I want to see at least 200 extra border guards and 50 extra vehicles deployed at the Bulgarian external borders as of October.

We will defend our borders, as well, with strict controls, adopted by the end of the year, on everyone crossing them. Every time someone enters or exits the EU, there will be a record of when, where and why.

By November, we will propose a European Travel Information System – an automated system to determine who will be allowed to travel to Europe. This way we will know who is travelling to Europe before they even get here.

And we all need that information. How many times have we heard stories over the last months that the information existed in one database in one country, but it never found its way to the authority in another that could have made the difference?

Border security also means that information and intelligence exchange must be prioritised. For this, we will reinforce Europol – our European agency supporting national law enforcement – by giving it better access to databases and more resources. A counter terrorism unit that currently has a staff of 60 cannot provide the necessary 24/7 support.

A Europe that protects also defends our interests beyond our borders.

The facts are plain: The world is getting bigger. And we are getting smaller.

Today we Europeans make up 8% of the world population – we will only represent 5% in 2050. By then you would not see a single EU country among the top world economies. But the EU together? We would still be topping the charts.

Our competitors would benefit from our division.

Only together are we and will we remain a force to be reckoned with.

Still, even though Europe is proud to be a soft power of global importance, we must not be naïve. Soft power is not enough in our increasingly dangerous neighbourhood.

Take the brutal fight over Syria. Its consequences for Europe are immediate. Attacks in our cities by terrorists trained in Daesh camps. But where is the Union, where are its Member States, in negotiations towards a settlement?

Federica Mogherini, our High Representative and my Vice-President, is doing a fantastic job. But she needs to become our European Foreign Minister via whom all diplomatic services, of big and small countries alike, pool their forces to achieve leverage in international negotiations. This is why I call today for a European Strategy for Syria. Federica should have a seat at the table when the future of Syria is being discussed. So that Europe can help rebuild a peaceful Syrian nation and a pluralistic, tolerant civil society in Syria.

Europe needs to toughen up. Nowhere is this truer than in our defence policy.

Europe can no longer afford to piggy-back on the military might of others or let France alone defend its honour in Mali.

We have to take responsibility for protecting our interests and the European way of life.

Over the last decade, we have engaged in over 30 civilian and military EU missions from Africa to Afghanistan. But without a permanent structure we cannot act effectively. Urgent operations are delayed. We have separate headquarters for parallel missions, even when they happen in the same country or city. It is time we had a single headquarters for these operations.

We should also move towards common military assets, in some cases owned by the EU. And, of course, in full complementarity with NATO.

The business case is clear. The lack of cooperation in defence matters costs Europe between €25 billion and €100 billion per year, depending on the areas concerned. We could use that money for so much more.

It can be done. We are building a multinational fleet of air tankers. Let’s replicate this example.

For European defence to be strong, the European defence industry needs to innovate. That is why we will propose before the end of the year a European Defence Fund, to turbo boost research and innovation.

The Lisbon Treaty enables those Member States who wish, to pool their defence capabilities in the form of a permanent structured cooperation. I think the time to make use of this possibility is now. And I hope that our meeting at 27 in Bratislava a few days from now will be the first, political step in that direction.

Because it is only by working together that Europe will be able to defend itself at home and abroad.

Excerpt from the State of the Union speech by the President of the European Commission Jean-Claude Juncker, September 14, 2016.