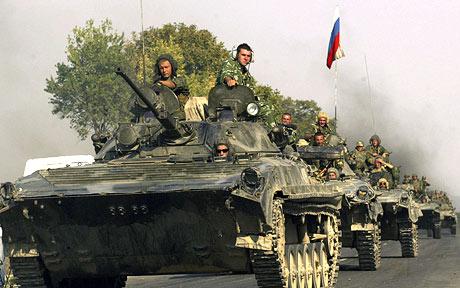 From Sergei Karaganov, Russia in Global Affairs:  The last threat of a military standoff existed before 2008, while the NATO’s expansion was fraught with the risk of taking over Ukraine. This could make Russia inadmissibly vulnerable from the standpoint of military security and could spark a split and a conflict inside Ukraine, in which the whole of Europe would join in with a high degree of probability.

NATO’s expansion was stopped, alas, not by persuasion or calls for common sense. The show of Russia’s military muscle in Georgia did it. Moscow should be “thankful” to the incumbent Georgian leadership and those who had instigated it to attack South Ossetia: with its war and defeat Georgia prevented a far more dangerous scenario.

Those in Russia who cry about the menacing foreign threat often point to NATO’s formal advantage in conventional forces and military hardware. But at the same time they pretend they do not see that these forces and spending on them in Europe have been steady on the decline for the past two decades, and there seems to be no end of it. . . .

It is possible to scare oneself with a European missile defense, the way the Soviet Union did, when confronted with Reagan’s Star Wars hoax. It is to be hoped that those who are campaigning against the European missile defense pursue far more rational political objectives: tying the Americans’ hands politically, getting a plausible and convincing excuse for refusal to take further negotiated steps to reduce any nuclear weapons. . . .

The ongoing reform of the armed forces is revolutionary, indeed. The large, traditionally mobilization-based Russian and Soviet army, meant for a major ground war with the West, is being replaced with a smaller, more professional and permanently combat-ready army, capable of providing an adequate response to low- and medium-intensive conflicts. The reform suggests and is already implementing increased reliance on nuclear weapons in preventing large conflicts, and these weapons are being upgraded, too.

Powerful nuclear weapons, although hard to use, are still necessary to ensure nobody should every try to attain supremacy in conventional weapons. Besides, this nuclear sword of Damocles is necessary to keep the “hotheads” at bay, especially now that the changes in the world, unprecedented in depth and scale, are leading to the loss of strategic benchmarks and common sense.

Sergei Karaganov is Chairman of the Presidium of the Council on Foreign and Defense Policy and Dean of the School of World Economics and World Politics at the National Research University–Higher School of Economics.  (photo: AP)