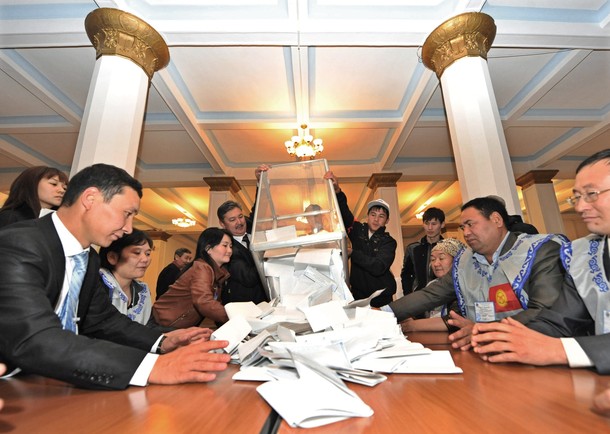 From Robin Paxton, Reuters:  While Sunday’s peaceful election in Kyrgyzstan bodes well for attempts to build Central Asia’s first parliamentary democracy, the struggle for influence in a highly fragmented legislature is only just beginning.

Five parties won seats in parliament on Monday after a landmark election aimed at shifting the strategic nation in a region dominated by post-Soviet strongmen away from failed authoritarian rule.

The United States and Russia, which have expressed opposing views on parliamentary rule in a country where both operate military air bases, will be interested in how quickly Kyrgyzstan can form an effective administration.

Only five of the 29 participating parties won seats in parliament, and the most successful — Ata Zhurt — scored less than 10 percent of the total vote. Almost two-thirds of the electorate voted for parties that will not be represented.

The 120 seats in parliament will be split proportionately between the five parties that passed the entry threshold. The fragmented result means the country is likely to be led by a coalition after much horse-trading.

Even a coalition between two parties would not produce a majority.  (photo: Getty)