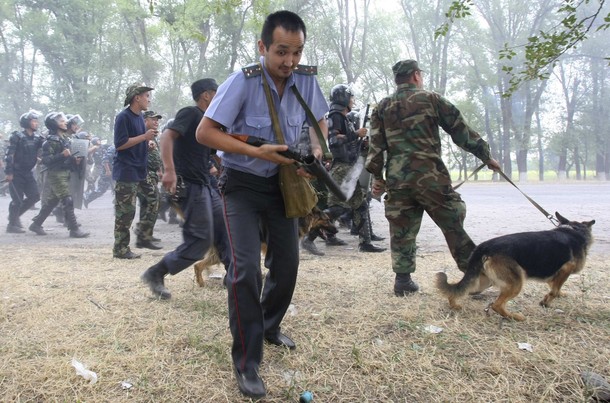 From Olga Dzyubenko and Alexei Anishchuk, Reuters: Kyrgyzstan will try on Friday to persuade members of a Kremlin-led security bloc to supply military hardware needed to maintain order in the volatile south of the Central Asian state.

Acting president Roza Otunbayeva will address a meeting of the Collective Security Treaty Organisation (CSTO), including several heads of state, in the Armenian capital Yerevan, the interim government’s press service said on Thursday.

Analysts said Otunbayeva, a former ambassador to Britain and the United States, would face a challenge persuading CSTO states to supply helicopters, armoured vehicles and training to Kyrgyz security forces before a landmark election in October.

"I have a feeling that there is a common mistrust in the current (Kyrgyz) authorities," said Alexei Malashenko, a specialist in Central Asian politics at the Carnegie Moscow Centre.

The interim government of Kyrgyzstan, an impoverished former Soviet republic that hosts both Russian and U.S. military air bases, has struggled to impose its authority since assuming power after a popular revolt toppled the president in April.

Nearly 400 people were killed and thousands left homeless during fierce clashes between ethnic Kyrgyz and Uzbeks in June, the worst bloodshed in the country’s modern history.

Further pressure from Kyrgyzstan would turn the gathering into a test of the viability of the CSTO alliance, seen widely as an ex-Soviet answer to NATO and which Moscow hopes can be a key player in a region extending as far as Afghanistan.

Russian officials say sending troops to Kyrgyzstan is not on the agenda, and analysts say the Kremlin is unwilling to risk Russian lives there at this point, despite its belief that post-Soviet Central Asia lies within its backyard.

Moscow would be keen to take any decision on supplying aid or military hardware collectively, said Malashenko, to show that the CSTO is a potent force.

Three of Kyrgyzstan’s Central Asian neighbours, Kazakhstan, Tajikistan and Uzbekistan, are members of the CSTO, along with Russia, Armenia, Belarus and Kyrgyzstan itself. (Photo: Reuters)