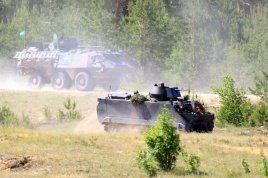 From the Ministry of Defense of Latvia:   "Sabre Strike 2011” – the joint multinational military training of land forces and air forces – will be held in Ādaži Training Area (ATA) and adjacent regional areas from October 17 to 31.

More than 1600 soldiers from Latvia, Lithuania, Estonia, Poland and U.S. will participate in “Sabre Strike 2011”. Latvian Ministry of Defence, regular units and National Guard of National Armed Forces (NAF) along with civil and local institutions will take part in this exercise.

The aim of "Sabre Strike 2011” is to tune together interoperability procedures and improve the integration of land and air operational ability of the three Baltic States and the U.S with prospects of participation in the ISAF (International Security Assistance Force) operation in Afghanistan and other multinational operations in the future.  (photo: Ministry of National Defense of Lithuania)