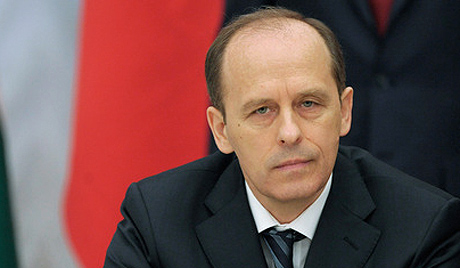 From Walter Pincus, the Washington Post:  New insights into Russia and its security services can be gained from a Nov. 5, 2009, confidential cable written to FBI Director Robert S. Mueller III before his visit to Moscow that month. The briefing was among the documents made public by WikiLeaks.

Written by U.S. Ambassador John Beyrle, an accomplished Russia expert, it not only describes the heads of Moscow’s three senior security services, with whom Mueller was to meet, it also outlines the roles those services play within the Russian power structure. …

Mueller was preparing to meet with FSB Director Alexsandr Bortnikov, whose agency, like the FBI, handles domestic crime, terrorism and counterintelligence; SVR Director Mikhail Fradkov, whose agency is the equivalent of the CIA; and Internal Affairs Minister Rashid Nurgaliev, whose department controls police forces and has some similarities to the U.S. Justice Department.

Beyrle said all three "tend toward a Cold War mentality, which sees the U.S. and its allies intent on undermining Russia," making "public accusations to that effect." Their agencies, in turn "are skeptical about the West’s motivations and are the most influential opponents of the engagement agenda."

However, the ambassador pointed out that "none of them is within the ‘inner circle’ of Kremlin decision-making, but instead enjoy the reflected power of their sponsors and allies." Fradkov, who worked for Putin years ago, and Bortnikov are economic specialists who work "behind the scenes to check the influence of Russia’s powerful business magnates and advance the interests of their allies," Beyrle said. Only Fradkov had experience in foreign relations, working in the Foreign Trade Ministry in the 1990s and as ambassador to the European Union for a year beginning in 2002.

While the FSB had elements working cooperatively with U.S. law enforcement agencies in the areas of terrorism, narcotics, cybercrime, organized crime and nonproliferation, that agency’s counterintelligence units have carried out "harassing activities against all embassy personnel [that] spiked in the past several months to a level not seen in many years," Beyrle wrote. These included false and slanderous attacks in the media, assertions that spouses had been killed accidentally and searches of homes.  (photo: RIA Novosti)