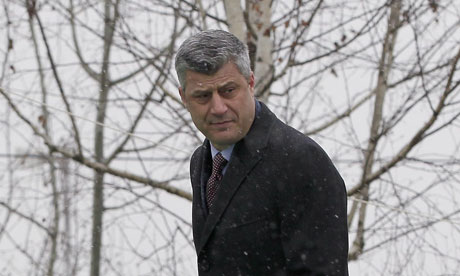 From Paul Lewis, the Guardian:  Kosovo’s prime minister, Hashim Thaçi, has been identified as one of the "biggest fish" in organised crime in his country, according to western military intelligence reports leaked to the Guardian.

The Nato documents, which are marked "Secret", indicate that the US and other western powers backing Kosovo’s government have had extensive knowledge of its criminal connections for several years.

They also identify another senior ruling politician in Kosovo as having links to the Albanian mafia, stating that he exerts considerable control over Thaçi, a former guerrilla leader.

Marked "USA KFOR", they provide detailed information about organised criminal networks in Kosovo based on reports by western intelligence agencies and informants. The geographical spread of Kosovo’s criminal gangs is set out, alongside details of alleged familial and business links. …

Thaçi, who was re-elected prime minister last month, has been strongly backed by Nato powers. His government has dismissed the Marty report as part of a Serbian and Russian conspiracy to destabilise the fledgling state.

However, the latest leaked documents were produced by KFOR, the Nato-led peacekeeping force responsible for security in Kosovo. It was KFOR military forces that intervened in the Kosovo war in 1999, helping to put an end to a campaign of ethnic cleansing by Slobodan Milosevic‘s Serbian forces.

Nato said in a statement tonight that it had instigated an "internal investigation" into the leaked documents, which are intelligence assessments produced around 2004, shortly before tensions with ethnic Serbs fuelled riots in Kosovo. …

Responding to the allegations in the NATO intelligence reports tonight, a Kosovo government spokesman said: "These are allegations that have circulated for over a decade, most recently recycled in the Dick Marty report. They are based on hearsay and intentional false Serbian intelligence."

"Nevertheless, the prime minister has called for an investigation by EULEX and has repeatedly pledged his full cooperation to law enforcement authorities on these scandalous and slanderous allegations."  (photo: Valdrin Xhemaj/EPA)