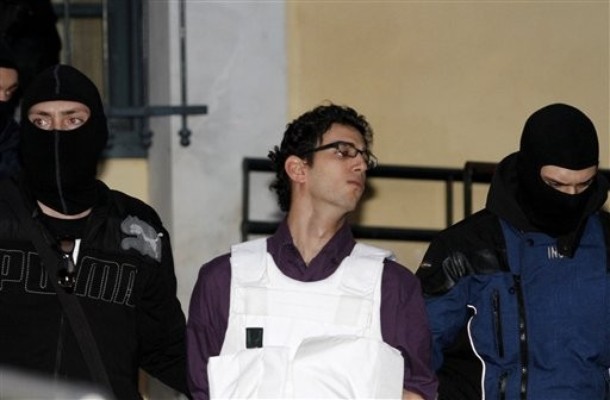 From Michael Slackman and Niki Kitsantonis, the New York Times:  A package containing explosives shipped by air from Greece was found in the mail room at the German chancellor’s office on Tuesday, just a few hours after letter bombs exploded at the Swiss and Russian embassies in Athens and three more devices were found addressed to other embassies there.

The chancellor, Angela Merkel, was visiting Belgium at the time and was not in the building. Federal police said the chancellery was evacuated and the device was disabled with a water cannon. …

Counter-terrorism officers have charged two suspects, both in their early 20s, with terrorist acts. One is suspected of belonging to the Conspiracy of the Cells of Fire, a small domestic terror group that has claimed responsibility for a string of attacks on government and business targets over the past two years that caused no injuries. The two were arrested Monday, when a letter bomb addressed to the Mexican Embassy exploded in the hands of a courier agent. The police detained the two suspects and destroyed three other letter bombs: one addressed to the French president, Nicolas Sarkozy, and two others addressed to the Belgian and Dutch embassies. …

The blasts in Athens on Tuesday began when personnel at the Swiss Embassy who were aware of the thwarted attacks the day before threw a suspicious package out of the building, according to media reports. It exploded. There were no immediate details about the blast at the Russian Embassy.

Parcel bombs are rarely used by domestic terror groups in Greece but a similar device detonated inside the Greek Public Order Ministry in June, killing the chief aide to the minister at the time, who had been the intended target. No group has claimed responsibility for the June attack, which occurred after security officials unwittingly took the letter into the compound.  (photo: AP)