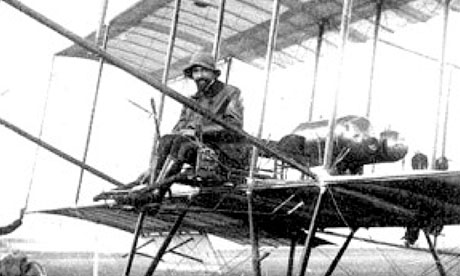 From Alan Johnston, the BBC:  Italy recently said it was ready to join in Nato’s air attacks on targets in Libya – and with the announcement came a sense of history repeating itself.

It was in Libya, almost exactly a century ago, that a young Italian pilot carried out the first ever air raid.

During fighting in November 1911 between Italy and forces loyal to the Turkish, Ottoman Empire, Lieutenant Giulio Gavotti wrote in a letter to his father: "Today I have decided to try to throw bombs from the aeroplane.

"It is the first time that we will try this and if I succeed, I will be really pleased to be the first person to do it."

And soon afterwards Lieutenant Gavotti did indeed hang out of his flimsy aircraft and fling a bomb at troops in a desert oasis below.

In that instant he introduced the world to the idea of war from the air. He had begun the age of the bomber, and opened the door to all the horrors it would bring. (photo: Guardian)