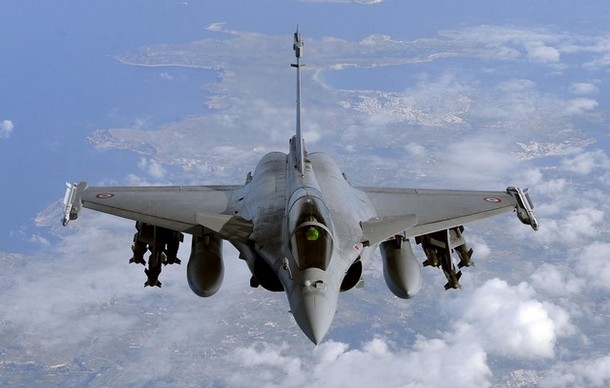 From Tim Hepher, Reuters:  "This is turning into the best shop window for competing aircraft for years. More even than in Iraq in 2003," says Francis Tusa, editor of UK-based Defense Analysis.   "You are seeing for the first time on an operation the Typhoon and the Rafale up against each other, and both countries want to place an emphasis on exports. France is particularly desperate to sell the Rafale."

Almost every modern conflict from the Spanish Civil War to Kosovo has served as a test of air power. But the Libyan operation to enforce UN resolution 1973 coincides with a new arms race –a surge of demand in the $60 billion a year global fighter market and the arrival of a new generation of equipment in the air and at sea. For the countries and companies behind those planes and weapons, there’s no better sales tool than real combat. For air forces facing cuts, it is a strike for the value of air power itself.

"As soon as an aircraft or weapon is used on operational deployment, that instantly becomes a major marketing ploy; it becomes ‘proven in combat’," says a former Defense export official with a NATO country, speaking on condition of anonymity about the sensitive subject. …

The rewards are huge. India, Brazil, Denmark, Greece, Saudi Arabia, UAE, Oman and Kuwait are among a growing list of countries shopping for one or more of the fighters flying sorties over Libya.

The deal of the moment: India’s plan to buy 126 fighter jets, an order which should be worth an estimated $10 billion. Reliability, say industry experts, is likely to be the key to winning the exports.

Four of the six companies in the running to sell New Delhi planes – Dassault’s Rafale, the Eurofighter Typhoon, Lockheed Martin’s F-16 and Boeing’s F/A-18 – have already helped enforce the no-fly zone over Libya. A fifth contender, the Saab Gripen, arrived in Sicily at the weekend, ready to take part in the first air combat action by the Swedish air force in decades. …

In the immediate PR battle over Libya, analysts say the Rafale appears to be winning. Not only was it handed a front-page role on the first day of the conflict, but it also scored a symbolic victory by reaching Libya equipped for air-to-ground attack, something the Typhoon has so far only done in tests. The Typhoon is focusing instead on air-to-air warfare against an enemy whose air force has been more or less pinned to the ground by strikes on radars and air defenses.

French officials dismiss any suggestion of deliberate showmanship in the deployment of Rafales in the opening hours of the conflict, saying their flexibility made them right for the task of destroying tanks that were closing on rebel positions in eastern Libya. But there is no doubt the lead taken by Sarkozy signals a more confident diplomatic posture that France hopes will benefit Rafale sales indirectly. Countries buying fighters must be ready to invest in a diplomatic relationship lasting 30 or 40 years, and competitors are bracing for an all-out French sales offensive once the conflict is over, or even before.

"[French President Nicolas] Sarkozy has done a great job in getting the Rafale out there and hitting a convoy early on. He will go to export markets and say this is what our planes can do," said a defense executive from a rival arms producing nation.

That’s something Washington will watch closely. Dispatches over many months show U.S. efforts to track the hyperactive French president during official visits as he campaigned from Libya to Brazil, India and the United Arab Emirates, for the first foreign sale of the Rafale. U.S. officials were so outraged by the "frothiness" surrounding Sarkozy’s two-day trip to open a French naval base in Abu Dhabi in May 2009 — a "poorly planned" French military maneuver interrupted vital fuel deliveries to Afghanistan — that the U.S. ambassador reported the visit had brought out the "most unseemly" aspects of both host and visitor. "The Emirati desire to be the object of unrestrained praise met its match in the French willingness to abase themselves in front of rich clients," according to the confidential cable. French defense sources say unflattering things about U.S. lobbying too.  (photo: Getty)