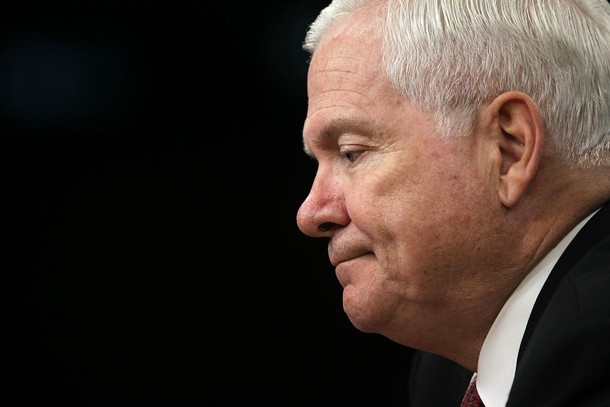 From Thom Shanker and Elisabeth Bumiller, the New York TImes:  Defense Secretary Robert M. Gates, as he prepared to depart the government for the second time, said in an interview on Friday that the human costs of the wars in Iraq and Afghanistan had made him far more wary about unleashing the might of the American armed forces.

“When I took this job, the United States was fighting two very difficult, very costly wars,” Mr. Gates said. “And it has seemed to me: Let’s get this business wrapped up before we go looking for more opportunities.”

“If we were about to be attacked or had been attacked or something happened that threatened a vital U.S. national interest, I would be the first in line to say, ‘Let’s go,’ ” Mr. Gates said. “I will always be an advocate in terms of wars of necessity. I am just much more cautious on wars of choice.”

Most recently, he expressed major reservations about American intervention in Libya. . . .

“The only thing I guess I would say to that is: I hope I’ve prevented us from doing some dumb things over the past four and a half years — or maybe dumb is not the right word, but things that were not actually in our interest,” Mr. Gates said.

Pressed to offer more details, Mr. Gates smiled and said, “I will in my book.”

Some of the defense secretary’s confidants, however, confirmed that Mr. Gates prevented provocative, adventurist policies against Iran, in particular, that might have spun into war.

“He’ll be remembered for making us aware of the danger of over-reliance on military intervention as an instrument of American foreign policy,” said former Senator David L. Boren, who, during his tenure as chairman of the Senate Intelligence Committee, developed a rapport with Mr. Gates when he was director of central intelligence in the early 1990s.

“I also think that he prevented further adventures, particularly in our relationship with countries like Iran, that could have turned into military intervention had he not become secretary of defense,” said Mr. Boren, who is now president of the University of Oklahoma. “I think that he stepped us back from a policy of brinkmanship.”  (photo: Getty)