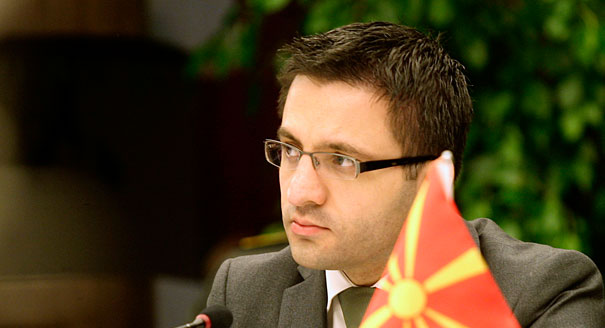 With NATO members gathering in Chicago in just a month, Macedonian Defense Minister Fatmir Besimi met at the Pentagon on Monday with Defense Secretary Leon Panetta to discuss the issue, which looms in large part because of the dispute over a seemingly trivial matter: Macedonia’s name.

“Secretary Panetta told Minister Besimi that he looks forward to the country’s future accession to NATO,” Pentagon spokesman George Little said after the meeting in a statement that provided few details of the discussions. . . .

Besimi, who visited the United States in part as a final push to raise awareness of the issue before next month’s NATO summit, insists his country’s name in no way represents a territorial claim to the Greek region.

Membership in the alliance “would be a benefit — for Greece, for all countries in the region and for NATO,” Besimi told POLITICO during an interview at the Macedonian Embassy in Washington. “We can make it happen if we find the way by talking and discussing and looking at each other as neighbors. . . .”

Besimi pledged continued support for NATO missions, regardless of the outcome of the naming dispute. “We behave, and we act as de facto members of NATO,” he said, noting that 163 Macedonian soldiers are now deployed in Afghanistan — making it the fifth-largest per capita contributor to the International Security Assistance Force.

“We want to make sure NATO can see Macedonia, and the United States can consider Macedonia, a partner for working together for ensuring peace and stability,” he said.  (photo: Reuters)