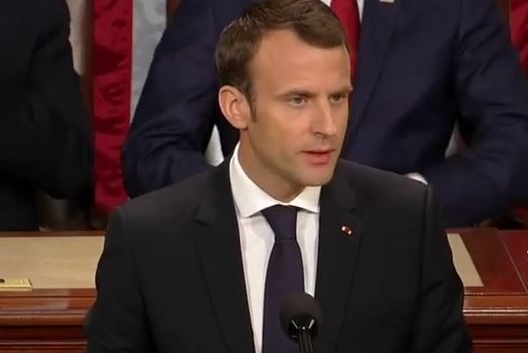 Since 1776, we, the American and French people, have had a rendez-vous with freedom….

[W]e must remember the warning of President Theodore Roosevelt: “Freedom is never more than one generation away from extinction. We didn’t pass it to our children in the bloodstream. It must be fought for, protected, handed on for them to do the same.”

This is an urgent reminder indeed. Because now, going beyond our bilateral ties, beyond our very special relationship, Europe and the United States must face together the global challenges of this century. And we cannot take for granted our transatlantic history and bonds. At the core, our Western values themselves are at risk.

We have to succeed facing these challenges, and we cannot succeed forgetting our principles and our history….

I am convinced that if we decide to open our eyes wider, we will be stronger. We will overcome the dangers. We will not let the rampaging work of extreme nationalism shake a world full of hopes for greater prosperity.

It is a critical moment. If we do not act with urgency as a global community, I am convinced that the international institutions, including the United Nations and NATO, will no longer be able to exercise their mandate and stabilizing influence. We would then inevitably and severely undermine the liberal order we built after World War II.

Other powers, with a stronger strategy and ambition, will then fill the void we would leave empty. Other powers will not hesitate one second to advocate their own model, to shape the 21st century world order….

This requires more than ever the United States’ involvement, as your role was decisive for creating and safeguarding today’s free world. The United States invented this multilateralism. You are the one now who has to help to preserve and reinvent it.

On April 25, 1960, General de Gaulle affirmed in this Chamber that nothing was as important to France as “the reason, the resolution, the friendship of the great people of the United States.” Fifty-eight years later, to this very day, I come here to convey the warmest feelings of the French nation, and to tell you that our people cherish the friendship of the American people, with as much intensity as ever. The United States and the American people are an essential part of our confidence in the future, in democracy, in what women and men can accomplish in this world when we are driven by high ideals and an unbreakable trust in humanity and progress.

Today the call we hear is the call of history. This is a time of determination and courage. What we cherish is at stake. What we love is in danger. We have no choice but to prevail. And together, we shall prevail.

Long live the friendship between France and the United States of America!