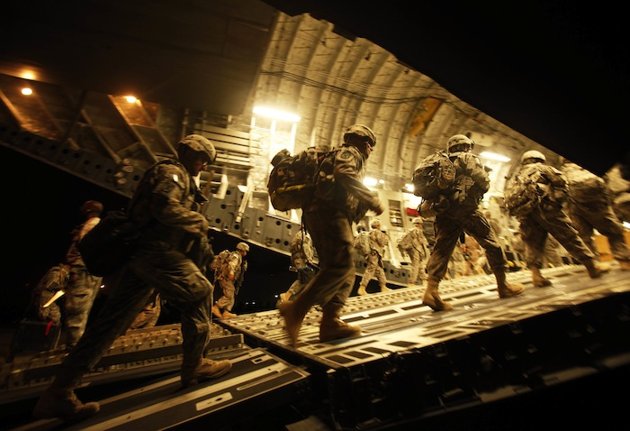 From Michelle Tan and Richard Sandza, the Military Times:  As many as 10,000 soldiers — and as many as 25,000 dependents — are expected to withdraw from Europe as the U.S. juggles shrinking budgets and force reductions with maintaining strong relationships with its allies, officials said.

On Jan. 12, Defense Secretary Leon Panetta said that two brigade combat teams — instead of just one BCT as originally planned — will be withdrawn from Europe. . . .

Details on how and when these rotational units will begin training in Europe are still being worked out, but Lt. Gen. Mark Hertling, commanding general of U.S. Army Europe, said he anticipates the rotations could be anywhere from three weeks to two months long.

“This is a guess on my part,” he said. “And the size of the unit that would be rotating, I don’t know, probably a battalion at a time. The development of the course of action that Mr. Panetta referred to is still in the early stages of development by the Army staff.”

About 41,000 soldiers and about 100,000 dependents are now in Europe, most of them in Germany. Three of the four BCTs in Europe are stationed in Germany; a fourth is in Vicenza, Italy. . . .

In addition to possibly cutting two BCTs, Hertling also has offered up the departure of about 2,200 other soldiers. These personnel, along with those from two BCTs, would total about 10,000 soldiers.

“I have also offered to the Army some other smaller organizations that I don’t think contribute as much to our mission here as they would in the United States,” Hertling said.

These include “a couple of [military police] companies, an engineer brigade headquarters, a couple of truck companies, [and] some logistics units,” he said. . . .

“I can adjust my mission to be OK with that number,” Hertling said. “When you think about all the other things that are going on, force reductions, budget deficits, equipment challenges, this is our contribution to what the Army is being asked to do.”

In addition, Hertling said, the brigade combat teams are just part of the overall Army force in Europe.

“Everybody’s really focused on brigade combat teams, [but] we’ve got 40,000 people over here,” he said. “We already knew we were losing 4,000 [soldiers], but we still have the training command, sustainment command, air defense, engineers, MPs, signal, intelligence, all those things that fall under the big category of enablers.”

“There are a lot of combatant commanders that we support,” he said. . . .

SOONER RATHER THAN LATER

Both brigades were scheduled to begin conversion to the modular heavy brigade combat team upon redeployment. After initial delays, the Army announced that the 172nd would go ahead with its conversion in 2013. The 170th’s conversion remains on hold.

The other two BCTs in Europe are the 2nd Stryker Cavalry Regiment in Vilseck, Germany, and the 173rd Airborne Brigade Combat Team in Vicenza, Italy. . . .

Hertling also has said he has recommended the withdrawal of the BCT be done sooner than the original deadline of fiscal year 2015. No decisions have been made about the timeline, but Hertling has recommended it be completed “long before” 2015, possibly beginning as soon as fiscal 2013, which begins in October.

If a second brigade is removed from Europe, it likely will happen within a year or so after the first brigade is withdrawn, Hertling said. . . .

DoD officials have spoken to European leaders about the withdrawal, and they understand why the change will be good for the U.S. military and NATO allies, senior defense officials traveling with the secretary said.  (photo: AP)