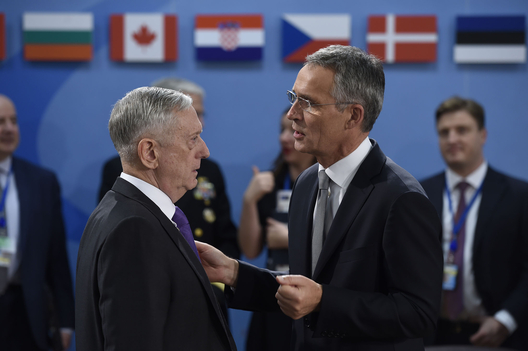 Secretary Mattis briefed the allies on the INF Treaty and the U.S. has determined that Russia is in violation of the INF Treaty, so that was an important message in his brief. NATO allies stressed, just as they did at the Warsaw Summit in 2016, that the INF Treaty is very important and that a strong and viable INF Treaty is a pillar for European security. So they also expressed that they will follow this very closely. This is a bilateral agreement between Russia and the United States, but of course this has a great importance for all NATO allies, especially European NATO allies because the INF Treaty eliminates a whole category of weapons, intermediate range missiles, which can carry nuclear weapons.

And I’m part of a political generation in Europe which really grew up with the very intense debate related to the deployment of the SS-20s and the Pershing and the cruise missiles after the Dual-Track Decision of NATO in 1979 and we also very much welcomed the INF Treaty which then eliminated all these weapons in Europe. So I think that the INF Treaty is a cornerstone, it’s extremely important that it is fully implemented, so we will continue to call on Russia to address the serious concerns in a substantial, transparent and verifiable way because the INF Treaty’s important for all of us.