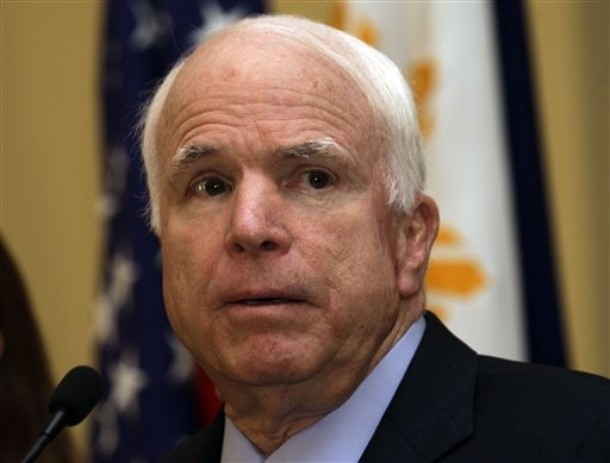 Speaking at an event on Capitol Hill hosted by the Atlantic Council, McCain, an outspoken advocate for a U.S.-led intervention in Syria, said it was shameful that NATO has done nothing while the government of Bashar al-Assad continues to violently suppress civil unrest in the country.

“Is it now the policy of NATO that we will stand by as rulers kill their people by the thousands, and our alliance won’t even discuss what we might do to help stop them?” McCain said. “This is shameful.”

NATO Secretary-General Anders Fogh Rasmussen has said that NATO has no current plan to intervene in Syria and that he does not envision one taking shape. . . .

For McCain, this strategy falls short of what he sees as NATO’s commitments.

“Shame on us and shame on the alliance, if we neglect our responsibilities to support brave peoples who are struggling and dying in an unfair fight for the same values that are at the heart of our alliance,” he said.

McCain said he’d also like to see NATO members use the opportunity in Chicago to discuss growing the alliance to include countries like Montenegro, Macedonia, Bosnia and Georgia.

“We hear it said that this will not be an expansion summit,” McCain said.

“That is regrettable. We must make it clear to all of these countries, and any other country in Europe that wants to be a part of NATO and can meet the criteria, that the path to membership is open to them.”

Former U.S. Secretary of State Madeleine Albright, speaking at the same event, said it should be remembered that NATO is not a gift, but a responsibility. New partners need to add to the strength of the alliance and not detract from it, she said.  (photo: AP)