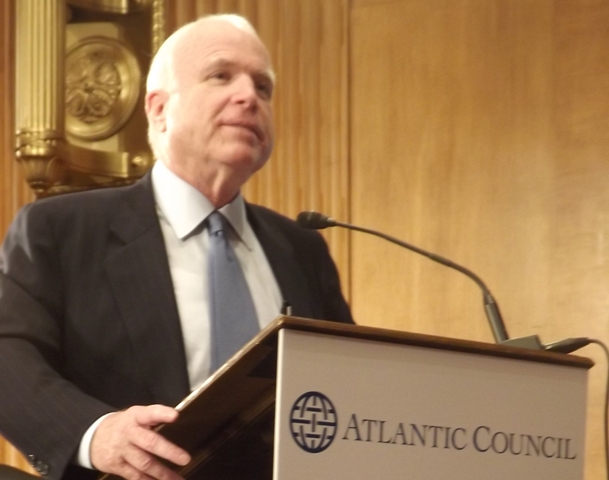 From Carlos Munoz, DEFCON Hill:  The U.S. military "will remain a fact on the ground" in Afghanistan long after a White House deadline to have all American troops out of the country expires, Sen. John McCain (R-Ariz.) said today.

That involvement would focus on providing intelligence and support for Afghan National Security Forces via U.S special-operations units, according to McCain’s prepared remarks for the Tuesday’s Atlantic Council forum on the upcoming NATO summit in Chicago.

The first step toward ensuring that extended U.S. role in the country is setting up a Strategic Partnership Agreement with the Afghan government, the Arizona Republican said.

Under such an agreement the United States "could … continue taking the fight to al Qaeda and the Taliban … ensuring that those groups can never again pose a military threat to Afghanistan" long after U.S. troops pull out of the country, McCain said.

Getting such an agreement in place would be "one of the most impactful achievements" to come out of the NATO conference and turn "America and NATO’s talk of a long-term political, economic, and military commitment to Afghanistan into a tangible reality."

“By concluding a strong Strategic Partnership Agreement in Chicago, we could change the narrative of NATO’s involvement in Afghanistan," he said. "This is an enormous opportunity [and] one that we cannot afford to miss."