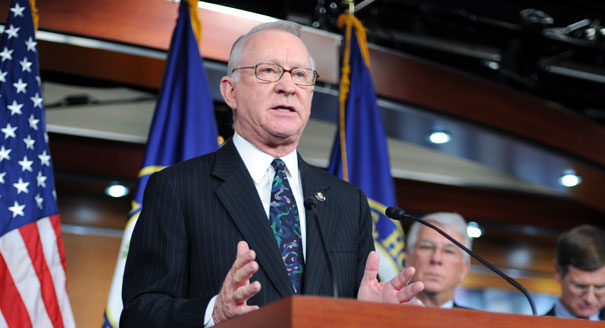 From Josh Rogin, the Cable:  So how did we get here? On March 17 — the same day that Obama was pursuing the authorization for war at the United Nations and two days after he decided he wanted to attack Libya — the president had a 90-minute lunch with House Speaker John Boehner (R-OH) but never mentioned Libya once , [chairman of the House Armed Services Committee Buck] McKeon said. McKeon left Washington that night, only to receive a phone call 10 a.m. Friday morning, saying, "The president wants you in the White House in an hour for a meeting."

"It’s like at the last minute somebody thought ‘here’s something we should check off, talk to the Congress,’" McKeon said.

When [Secretary of State Hillary] Clinton and Secretary of Defense Robert Gates eventually did come to Capitol Hill to brief Congress a week later, someone asked Clinton directly to address the issue of Congressional authorization and the War Powers Resolution.

"[Clinton] said, paraphrase, ‘It doesn’t matter what you think, we’re doing what we’re doing.’" McKeon said. "I heard from a lot of people on both sides of the aisle that that really bothered them. . . ."

Communication with Congress did not improve from then on, leaving lawmakers to come up with their own views on the war, McKeon said.

"There are a lot of people in the conference that feel the president has violated the constitution. And yet, some of those same people, they’re not opposed to the mission in Libya," McKeon said." They think if he had met with Congress or in some way done a better job of setting up what he was going to do, they would feel much more comfortable and we wouldn’t even be at the point where we are at. . . ."

"The President is in a box because he’s getting hit from the left as far as anything he does with the military, so he used [NATO] as cover," McKeon said. "NATO is us. So I think that was just a thing the president kind of used to say ‘hey it’s not us.’ They can’t do it without us."  (photo: John Shinkle/POLITICO)