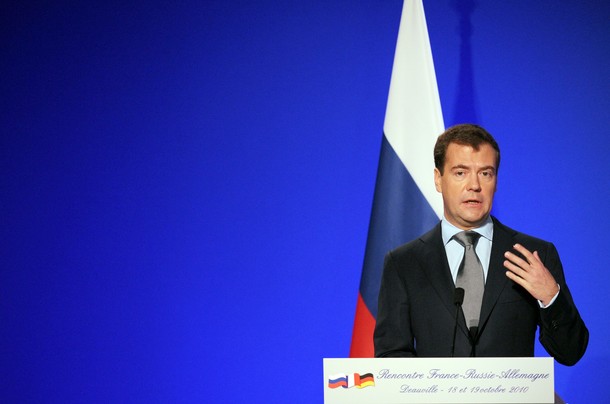 From RIA Novosti:  Russian President Dmitry Medvedev said he would attend the NATO summit in Lisbon on November 20.

"I would like to announce that I will attend the Russia-NATO summit which will be held on November 20 in Lisbon," Medvedev said at a joint press conference after talks with the leaders of France and Germany in Deauville, France.

"I believe, this will facilitate [the process of] reaching compromises and developing dialogue between the Russian Federation and the North Atlantic Alliance," the Russian president added. …

"I am very glad that Russian President Dmitry Medvedev said he would visit the NATO summit in Lisbon; this is a good message as the relations between Russia and NATO should be placed onto a good basis," German Chancellor Angela Merkel said.

From Secretary General Anders Fogh Rasmussen, NATO:  I am pleased that President Medvedev has joined the other leaders of the member states of the NATO-Russia Council in accepting my invitation to participate in a NATO-Russia Council Summit, which will take place in Lisbon on November 20th.

The Summit will be an important opportunity to deepen and broaden the political dialogue and practical cooperation between the NATO-Russia Council members, to enhance our shared security.  (photo: Getty)