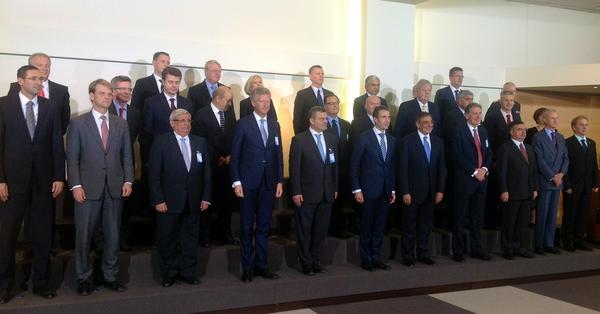 From Adrian Croft, Reuters:  NATO ministers wrestled on Tuesday with how to prevent austerity-driven defense cuts in many member countries from undermining the power of the 63-year-old Western alliance. . . .

On the first day of a two-day meeting in Brussels, NATO defense ministers were looking at how to make scarce defense dollars go further by increasing multinational cooperation and cutting wasteful duplication of effort. . . .

One NATO answer to the cash shortage has been "smart" defense. This means more cooperation between alliance members to reduce wasteful duplication of equipment and to enable members to access to capabilities they could not afford on their own.

NATO allies are working on 24 multinational programmes and more are in the works. One example is a "universal armaments interface" to enable fighter jets to use munitions from various sources and nations.

[NATO Secretary General Anders Fogh] Rasmussen avoided expressing an opinion on the merger, whose future hung in the balance on Tuesday, but said he favored restructuring Europe’s defense industries to make them more competitive.

Another idea debated by ministers was whether NATO’s own central pool of funds could be used to help develop shared multinational capabilities. NATO’s central military budget, made up of contributions from member states, totals 1.45 billion euros this year, about a third of which is spent on operations.

"As the level of activity in our operations goes down, the question arises what do you do with this money?" said a senior NATO diplomat, speaking on condition of anonymity.  (photo: US Mission to NATO)