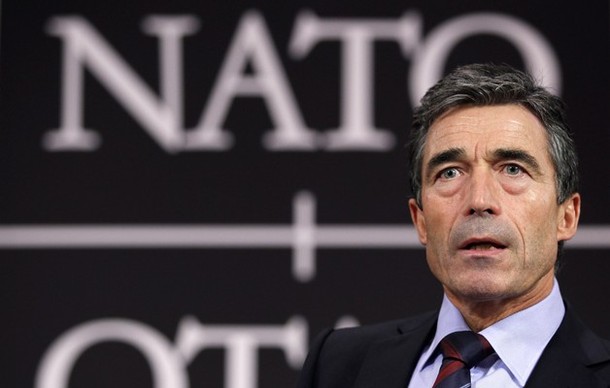 From David Brunnstrom and Charles Dick, Reuters:  Russian participation in a planned missile defense shield in Europe could open the door to progress in other areas such as reducing nuclear and conventional weapons, the head of NATO will say on Friday.

But in a speech he will make in Rome, NATO Secretary-General Anders Fogh Rasmussen will underline that the large Russian military presence in breakaway territories of Georgia and Moscow’s plan to station missiles there are stumbling blocks to such goals.

Rasmussen invited Russia on Wednesday to hold talks with the 28 NATO states at an alliance summit in November at which he wants the Western allies to agree to link existing missile defense systems and to formally invite Moscow to participate. …

"Progress in missile defense can create a better climate for progress in other areas critical to European security, including when it comes to conventional weapons," Rasmussen will say in his speech, according to a draft seen by Reuters.

"If we build missile defenses in Europe outside of a NATO framework, and without a clear offer to Russia, it will create new dividing lines, between who is in and who is out."

He will argue that Russian involvement in the missile defense system could "reinforce a virtuous circle" — not only creating conditions for conventional arms control but diminishing the perceived need to rely on nuclear protection.

"If Russia and other countries feel like they are inside the tent with the rest of us, rather than outside the tent looking in, it will build trust … Controls on conventional weapons make it easier to contemplate diminishing reliance on nukes."

However he will warn that the Convention Forces in Europe Treaty, from which Russia has suspended its participation is currently on "life support," and it would become politically difficult and eventually impossible for NATO allies to abide by its provisions if Russia did not.  (photo: Reuters)