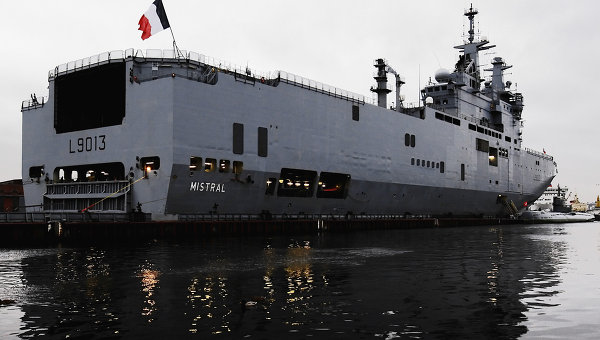 From RIA Novosti:  Russia’s contract to buy Mistral class helicopter carriers from France should be signed in Paris at the Euronaval 2010 defense show in October or Russia may lag behind in the ship building industry, Russian Navy commander Admiral Vladimir Vysotsky said.

Originally Russia was negotiating the purchase of one French-built Mistral class amphibious assault ship and planned to build three more vessels of the same class in partnership with the French naval shipbuilder DCNS. But earlier this year, French President Nicolas Sarkozy said talks were underway on the 2+2 scheme, under which Russia will buy two ships from France, and build a further two under license in Russia.

"I hope Russian and French specialists will draft the Mistral contract by the start of the Euronaval event," Vysotsky said.

"If we do not sign a contract on the Mistral, we will greatly lag behind in the speed and rate of our construction of such ships," the Navy commander said.  (photo: Alexey Danichev/RIA Novosti)