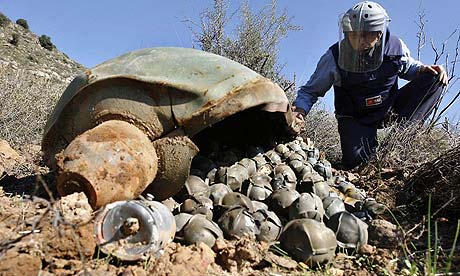 From Interfax:  The Moldovan military have completed the destruction of the last cluster munitions from the National Army arsenals at a testing range of the Bulboaka military base.

"The completion of the operation means that Moldova has become the world’s first country to have destroyed cluster munitions from its military arsenals," the Defense Ministry said.

It was reported that the Moldovan National Army has, in particular, more than 800 projectiles and 78 cluster bombes made in 1961-1987. Their service life has long expired.

The mission to destroy cluster munitions was accomplished in line with Moldova’s commitment to strengthen regional security. Under a memorandum agreement signed between the Moldovan Defense Ministry and Norwegian Peoples Aid, a nongovernmental organization, on December 14, 2009, the army has received technical aid for destroying cluster munitions.

The project is worth 108,000 euros, of which 61,000 were contributed by the Spanish government and 47,000 by the Norwegian Foreign Ministry.  (photo: Mohammed Zaatari/AP)