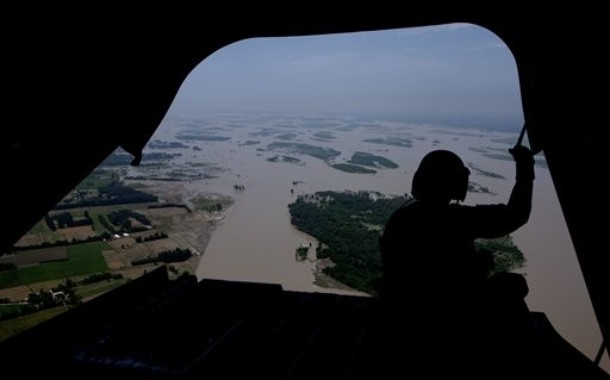 From The Hindu: With eight lakh people still stranded in areas cut-off from land routes across the country, the UN on Tuesday night issued an urgent appeal for 40 additional heavy-lift helicopters. This SOS came amid reports of the Pakistan Army pulling out some helicopters from the ongoing operations against militants in the tribal agencies along the Afghan border for assisting in the flood relief effort.

“We need at least 40 additional heavy-lift helicopters, working at full capacity, to reach the huge numbers of increasingly desperate people with life-saving relief”, said Marcus Prior of the World Food Programme. Though NATO has offered airlift facilities, visiting European Commissioner for International Cooperation, Humanitarian Aid and Crisis Response, Kristalina Georgieva said aid organizations are reluctant to have its helicopters participate in the actual relief operations because of the sensitivities attached. Helicopters from the U.S., however, have been used for rescue and relief operations in many parts of the country.