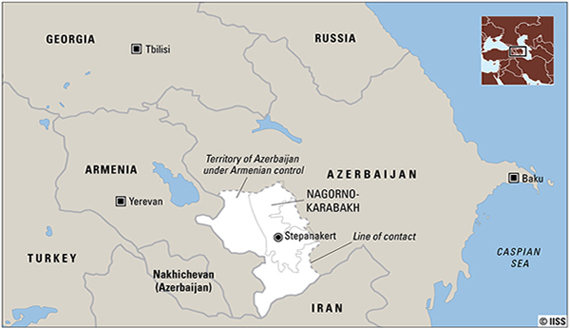 From the International Institute for Strategic Studies:  Russia is striking a new balance in its relations with Armenia and Azerbaijan, which have long been at loggerheads over the disputed territory of Nagorno-Karabakh. Russian President Dmitry Medvedev was in Baku on 2–3 September to meet Azerbaijani President Ilham Aliyev, continuing to promote warmer ties between their countries after a history of diplomatic distance. The visit followed unconfirmed reports of a major sale of Russian arms to Azerbaijan. Meanwhile, Russia and Armenia – traditionally Moscow’s closest political ally in the South Caucasus – signed a new military agreement during a recent trip to Yerevan by Medvedev.

Moscow’s two-sided strategy seems partly designed to keep up pressure on the two countries to avoid a renewal of conflict over Nagorno-Karabakh. In addition, its latest moves serve its interests by strengthening its security presence and relationships in the region, and boosting revenue from arms sales. …

Although many Azerbaijanis understand that their country lacks the military capabilities needed to win, Baku has been using increasingly aggressive rhetoric, vowing not to accept the status quo and to exercise its right to restore its territorial integrity by force. ‘The war is not over,’ Aliyev warned on 10 August. ‘We should be ready at any moment to liberate our lands… We have mobilised all financial resources to strengthen our military, and today Azerbaijan’s army…  can fulfil this task.’ He added: ‘If the negotiations do not bring results, we will be compelled to solve the conflict by military means.’

Such statements reflect the growing concern in Azerbaijan that Armenia is only taking part in peace negotiations to buy time, and does not intend to begin withdrawing forces from occupied territories. Azerbaijan is also concerned that Kosovo’s independence and Russia’s recognition of Abkhazia and South Ossetia could set a precedent for Nagorno-Karabakh.

While Armenian forces seem able to defend themselves, it is not obvious that they would receive Russian military assistance in any renewed conflict with Azerbaijan. Despite Armenia’s CSTO membership and the new agreements signed by Medvedev few in Moscow believe Russia would automatically intervene on the side of Armenia. CSTO guarantees were recently thrown into question when Russia rejected a request from Kyrgyzstan for the organisation to send forces to quell violence in its southern region of Osh. And although Medvedev reiterated in August that Armenia was Russia’s ally, his chief foreign-policy aide Sergei Prikhodko later stressed that Russia was not saying it would defend Armenia against Azerbaijan. Russia recognises the territorial integrity of Azerbaijan and might stand back if military operations were not affecting the territory of Armenia proper or the Russian base there.

Against this background, Russia’s military diplomacy may be prompting a change in the strategic calculations on either side. Moscow is keeping them both guessing. (graphic: International Institute for Strategic Studies) (via Global Europe)