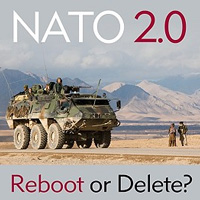 Presention of the new book, NATO 2.0: Reboot or Delete?, by Sarwar A. Kashmeri, a senior fellow in the International Security program of the Atlantic Council, Fellow at the Foreign Policy Association (NY), and Senior Advisor at ISIS Europe.   The discussion will be led by Giji Gya, Executive Director, ISIS Europe.

In the light of NATO’s waning powers, the rise of the CSDP, and a Europe that is increasingly meshing its 27 members’ foreign and defence policies into a common approach after the adoption of the Lisbon Treaty, Kashmeri considers it meaningless to draft a future for NATO independent of the CSDP. He addresses questions on where NATO and the CSDP are going, and recommends several dramatic steps on how future global military forces should respond to common threats: bridge NATO and the CSDP; make the EU responsible for its own security; and invoke NATO only in extreme cases, establishing a common global vision regarding the use of force.

“This book”, as Robert E Hunter of the independent American think-tank RAND Corporation and former U.S. Ambassador to NATO writes, is “the blueprint for moving forward”.