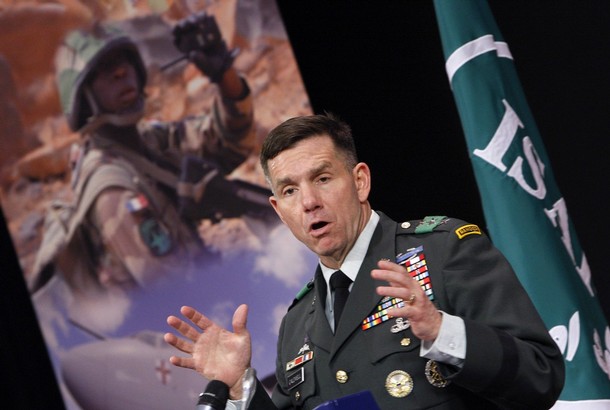 From Deb Riechmann, the AP:  More nations are pledging support, yet NATO still faces a shortage of 740 trainers needed to get Afghan soldiers and policemen ready to take the lead in securing their nation, the coalition’s top training official says.

Needed most are 290 police trainers, including those to work in new training centers opening in Afghanistan this year, U.S. Lt. Gen. William Caldwell, the commander of NATO’s training mission, told The Associated Press in an interview Saturday.

Afghan President Hamid Karzai wants his nation’s police and army to take the lead in protecting and defending their homeland by 2014, a deadline that will be reached only if the training effort – already on a fast track – gets even more support from NATO and other nations. Caldwell said the coalition wants to have the additional 740 trainers in place by this summer.

"The NATO secretary-general has said, ‘No trainers, no transition,’" Caldwell said. "He is exactly right. If you don’t have sufficient numbers of trainers, then we can’t set the conditions for transition in 2014. …"

The Afghan army and police still need thousands more officers trained. And there still is a critical shortage of trainers who can teach specific skills, such as how to manage military hospitals and clinics or fly and maintain Mi-17 aircraft.  (photo: Reuters)