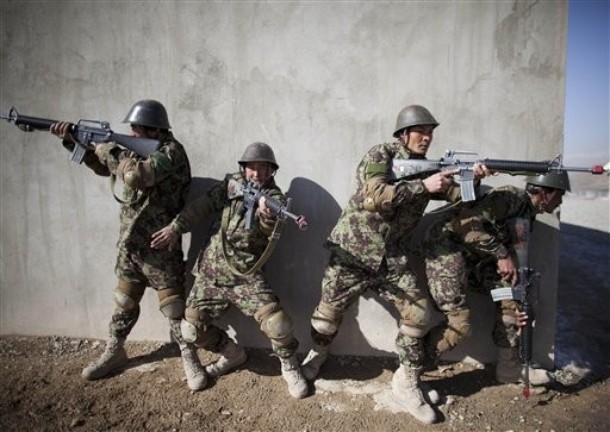 From Slobodan Lekic and Deb Riechmann, the AP:  Afghan forces will soon start taking charge of security for three-quarters of the nation’s 28 million people, NATO’s top military commander said Wednesday , a milestone as the country assumes the lead for protecting the majority of its population.

Adm. James Stavridis also insisted the training of the Afghan army and police was proceeding very well, despite attacks in which Afghan soldiers have turned their weapons on their U.S. and NATO partners.

"Very shortly we will announce further transition that will encompass 75 percent of the population," Stavridis said in an interview with The Associated Press. He did not elaborate further on the exact timing of the announcement. . . .

Stavridis said the target of over 350,000 security forces members will be achieved this summer, several months ahead of plans.

"The strategy is sound and is providing results," he said. "I expected good performance from the Afghan National Army (after 2014) … they are a very proud army, led by experienced combat officers."

The process of transitioning to Afghan lead was accelerated last year.

Instead of a six-stage process, the plan was changed to now achieve the transition in five steps, with the last starting as early as mid-2013 instead of 2014 – when most NATO troops are scheduled to depart Afghanistan.  (photo: AP)