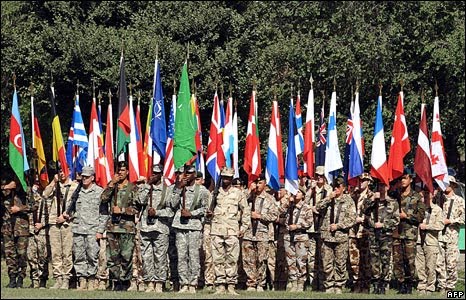 From David Brunnstrom, Reuters:  NATO officials also declined to provide details, but the reforms proposed by Rasmussen aimed to cut the number of major NATO bases to seven from 11.

Turkey said this week it expected NATO to pick the Turkish NATO air base at western city of Izmir for its future land forces’ command, which would mean the closure of current land bases at Heidelberg in Germany and another near Madrid, Spain.

NATO now has two commands each for its land, air and naval forces and three joint-force commands, but this duplication has come under scrutiny with defence budgets throughout the Western world under pressure due to the economic crisis.

NATO sources have said Rasmussen’s reforms proposed closing one of each of the land, air and naval bases and one joint-force command. The naval bases are in Italy and Britain and the air bases in Turkey and Germany. . . .

The joint force command at Lisbon, Portugal, was considered most under threat. The two others are in the Netherlands and Italy.  (photo: AFP/BBC)