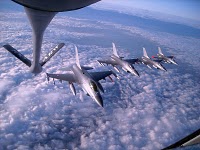 From the Polish Ministry of National Defence: BRILLIANT ARDENT is a large scale Air Force exercise to be hosted by Germany and directed by Commander Allied Air Command Izmir, Turkey. Air Forces from seven NATO members will participate in this NATO Response Force exercise from 12 to 22 April 2010.

The aim of the exercise is to validate nominated Air Forces to NATO Response Force 15 (NRF), which starts July 2010. The exercise is also open to “non NRF” air units from NATO, as well as Partnership for Peace (PfP) nations. The exercise scenario is based around a UN mandated NATO-led Crisis Response Operation (CRO) in a fictitious geo-political setting, a scenario specifically designed for this exercise. The NRF concept provides the Alliance with a robust capability to meet the challenging security environment of the 21st century by providing a highly trained and agile force, at high readiness, able to deploy at short notice wherever and whenever directed to do so by the North Atlantic Council.  (photo: Tech. Sgt. Kevin Wallace/USAF)