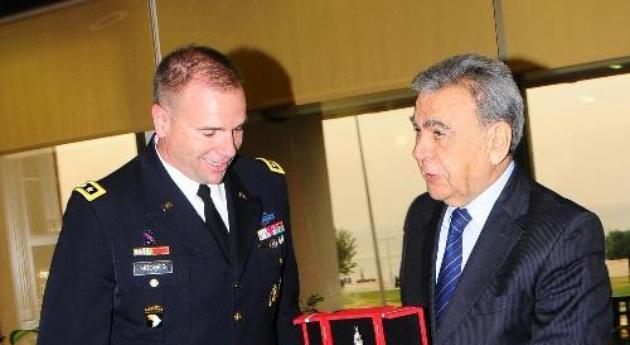 From John Vandiver, Stars & Stripes:  A new NATO land command headquarters, restructured to streamline costs and decision making, will be activated next week in Turkey as the new home for planning how infantrymen from the 28-nation alliance fight together.

As the war in Afghanistan winds down, one of the prime focuses of NATO Allied Land Command will be harnessing that war fighting experience to ensure that the alliance doesn’t lose the lessons learned, said the American Army officer commanding the new headquarters in Izmir, Turkey.

Coming off more than a decade at war, the level of “interoperability” among NATO members is at an all-time high, Lt. Gen. Frederick “Ben” Hodges, said.

“My job will be to maintain that level of interoperability,” Hodges said. “You’ve got to retain this experience, and a lot of that resides in the noncommissioned officer corps.”

Following an activation ceremony on Friday in Izmir, Allied Land Command headquarters will formally assume the responsibilities of Force Command Heidelberg, Germany, and Force Command Madrid, Spain, which are being deactivated as part of NATO’s transformation. A similar merger of Air Command headquarters formerly in Turkey with one in Germany is taking place at Ramstein Air Base. . . .

The transformation of NATO’s Land Command is just one part of a 2011 NATO decision designed to streamline the alliance’s overall command structure. Once fully implemented, it will result in a 30 percent reduction in manpower, taking Allied Command Operations from 13,000 personnel to about 8,800, according to NATO.

The new Land Command will have about 350 people, down from roughly 800, Hodges said.

“Turkey’s location from a geographic standpoint — adjacent to the Middle East, nearly adjacent to Russia — it’s an important location,” Hodges said. “It sends a signal not only to Turkey and the rest of the alliance. It sends a signal to the other neighbors.”  (photo: Haber Monitor)