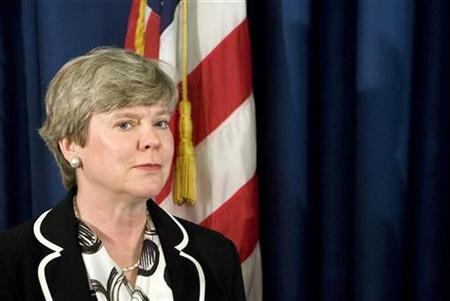 From Vanessa Gera, the AP:  Rose Gottemoeller, the chief U.S. negotiator of New START, visited Poland, Ukraine and the three Baltic states in recent days to hear how these countries view the issue of tactical weapons.

She said she has heard concerns across the region about Russian threats to build up its stockpile of tactical weapons in Kaliningrad, a Russian territory wedged between Poland and Lithuania.

"There is a generalized concern about Kaliningrad and Russian propensity to, every time a concern is aroused in Moscow, to say, well, ‘time to bring something else to Kaliningrad,’" said Gottemoeller, who is assistant secretary of state for arms control.

"I would say it’s a generalized concern among the countries of the region that I have visited this week."

Russia has not said whether it has nuclear weapons in Kaliningrad, but officials in neighboring countries are convinced they are there. Lithuanian Defense Minister Rasa Jukneviciene said this week that it’s "no secret" that Russia has tactical weaponry in Kaliningrad.

Poland has expressed concerns in the past over threats by Russia to place missiles in Kaliningrad in reaction to a U.S. plan for a missile defense system in the region.  (photo: Max Rossi/Reuters)