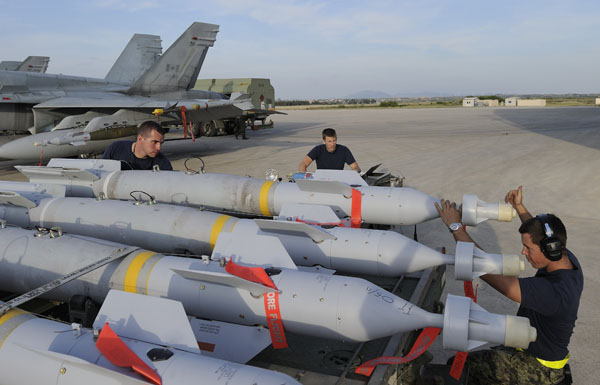 From Zachary Fryer-Biggs, Defense News:  As NATO allies move troops and Patriot missile batteries into Turkey, heating up an already dicey situation on the Syrian border, experts are pointing to an alarming possibility: Most NATO countries might be ill-equipped to intervene in the ongoing conflict in Syria.

The problem stems from allies’ relatively small stockpiles of precision-guided munitions (PGMs), the smart bombs critical to effective operations in densely populated areas. So even if NATO members voice full support for an operation, they might not have the weapons to back it up.

“The heart is willing, but the flesh is weak,” said a former U.S. State Department official. . . .

Because of Syria’s superior air defense network and greater population density, the demand would outstrip supply, said Guy Ben-Ari, a senior fellow at the Center for Strategic and International Studies.

Concern over the stockpiles of precision weapons is not theoretical. Less than a month into the 2011 Libya campaign, NATO came close to running out of PGMs, which are both advanced and expensive bombs. The situation became sufficiently dire that the U.S. rushed munitions to allies to help feed the campaign, and even kept aircraft on call in case NATO allies needed assistance after the U.S. had ceded major operational control. At the time, six countries were providing aircraft for the campaign: Belgium, Canada, Denmark, France, Norway and the U.K. . . .

“[Ben-Ari:] There really is a big question mark on whether the PGM inventory specifically has even been brought back to pre-Libya levels, let alone overstocked for a potential Syria campaign.”

Yet several defense officials from NATO countries voiced confidence in their stocks of PGMs.

A senior Italian defense source said the Italian Air Force is “satisfied with its stocks of precision munitions, although not in reference to any specific mission.” A French defense official said that if there were an intervention, it would be in a coalition, and there would be sufficient stockpiles in the coalition. The official would not give numbers but indicated that France has “enough” bombs or could acquire them through its allies.

However, on Dec. 14, the French news website lepoint.fr reported France’s stocks will not return to pre-Libya levels until the end of 2013, citing a report from the Defense Ministry’s inspector general. A Defense Ministry spokesman declined to comment on the levels of munitions and the time for rebuilding stocks but pointed out that it takes about six months for an order contract to be signed, including the tender process, and the manufacturing time for sophisticated munitions takes months, not weeks. (photo: NATO)