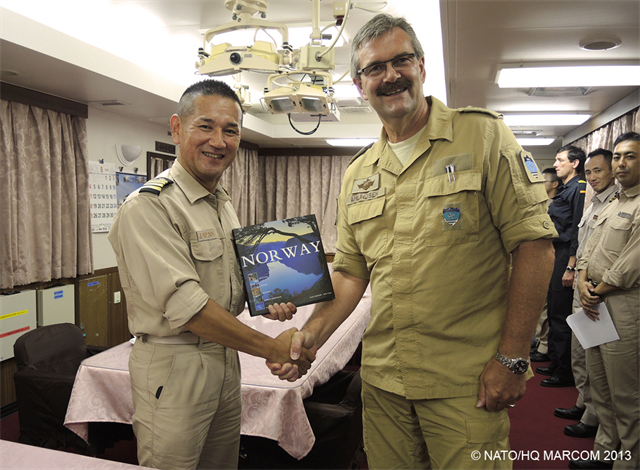 The Japanese Force is providing anti-piracy escorts for merchant vessels transiting between the Red Sea and the Horn of Africa in the Internationally Recommended Transit Corridor (IRTC). The presence of independent deployers in the area provides a significant contribution to the deterrence of pirates.

The meeting provided an opportunity for the two commanders to share information between NATO and the Japanese Navy and discuss counter-piracy tactics and procedures. Cooperation between the forces is vital given the size of the operational area and the large number of ships from different countries taking advantage of the protection offered in the IRTC.

“The Japanese Escort Division provides an important and steady contribution to the international counter-piracy effort,” said Amundsen. “It is important for NATO to maintain a close relationship with the forces and independent deployers in the area, as cooperation is essential to protect the mariners transiting the Gulf of Aden. I want to thank Captain Iwasawa for his work in the IRTC, and I am looking forward to meeting the new Japanese Escort Division Commander when he reports.”

Image: "I want to thank Captain Iwasawa for his work in the IRTC" (photo: NATO/HQ MARCOM)