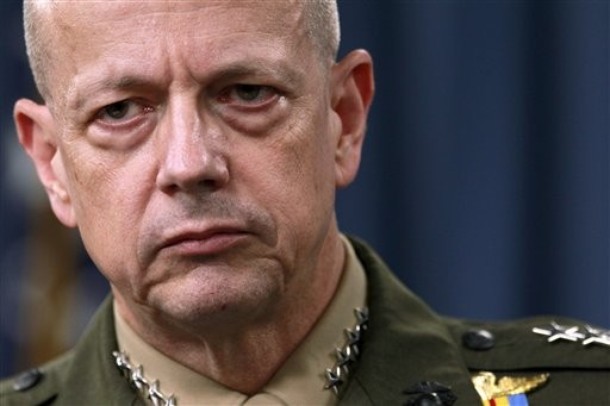 From Deb Riechmann, the AP:  The commander of US and NATO troops in Afghanistan apologized Friday for civilian deaths in a coalition airstrike earlier this week – the first confirmation by NATO forces that civilians were killed in the operation.

Marine Gen. John Allen flew to Logar province to personally deliver his regrets to villagers and provincial officials for the deaths of women, children and village elders in Wednesday’s pre-dawn raid to capture a Taliban operative. . . .

"I know that no apology can bring back the lives of the children or the people who perished in this tragedy and this accident, but I want you to know that you have my apology and we will do the right thing by the families," Allen told the group of about two dozen Afghans gathered at a base at the provincial capital of Pul-i-Alam. . . .

NATO and Afghan officials have said the troops were on an operation to capture a Taliban leader who had holed up in the house in Baraki Barak district’s Sajawand village. As they tried to breach the compound, they came under fire and fought back, eventually calling in an airstrike.

Villagers have said there was a wedding at the house the evening before and that it was full of families visiting for the celebration. The morning after the bombing, they piled the bodies of the dead into vans and drove them to the provincial capital to protest the airstrike.

An Afghan doctor who examined the bodies and interviewed two women injured in the airstrike said a group of Taliban fighters decided to spend the night in the house because they thought the wedding would provide them cover. When NATO and Afghan troops started advancing on the house in the middle of the night, they called out for any civilians to come out, but the insurgents didn’t allow them to leave, said Wali Wakil.

"The Taliban stopped them from getting out of the house," Wakil said. He said the 18 dead civilians including four women, two old men, three teenage boys and nine young children. Six Taliban fighters were also killed, Wakil said, citing the witnesses. Police had said previously that the district Taliban commander was killed.  (photo: AP)