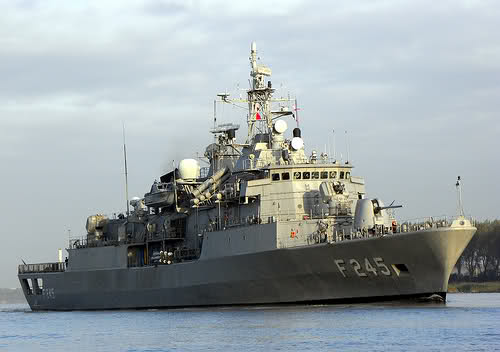 Unpredictable deterrent surge operations were foreseen by the revised OAE Operational Plan of January 2010 which directed that the overall approach to OAE would become less platform-based and increasingly network-based.

"This is a very interesting moment in what has been almost a decade of OAE,” according to Vice Admiral Rinaldo Veri, Commander of Maritime Command Naples the headquarters running the operation. "There is massive focus on the maritime operations taking place in support of the Security Council Resolutions regarding Libya. However Operation Active Endeavour has not stopped. Indeed due to Libya-related operations there is a large area of the Mediterranean saturate with assets and surveillance which, although not strictly part of the anti-terrorist mission, can act in associated support of OAE and clearly acts to diminish any ability terrorists have to maneuver in the maritime environment.”

The SNMG2 deterrent surge follows another surge recently carried out by the Standing NATO Mine Counter-measures Group 1 in the Western Mediterranean.

Operation Active Endeavour (OAE) is part of NATO’s multi-faceted response to the terrorist threat. Its mission is to conduct maritime operations in the assigned area of operations to demonstrate NATO’s resolve to help deter, defend, disrupt and protect against terrorism. As the Alliance has refined its counter-terrorism role in the intervening years, the operation’s mandate has been regularly reviewed and its remit extended. OAE’s achievements through targeted maritime operations are highly impressive and constitute a significant deterrent to terrorist activity in the Mediterranean Sea. The Operation not only demonstrates NATO’s resolve but is also a vivid example of the added, essential value that NATO can bring to the complex, global fight against terrorism. The contribution/collaboration/co-operation with partners and Mediterranean Dialogue countries substantially improves the overall effectiveness of OAE.  (photo: Politics Forum)